Dungannon Swifts will be at The Oval on Friday for the Premiership showdown with hosts Glentoran.

All of our predictions, stats and the user poll for Glentoran v Dungannon Swifts are shown below - plus the latest match odds.

Glentoran will be looking for a repeat result of a 0-1 Premiership success against Crusaders.

The only player to score from Glentoran was Hrvoje Plum (78').

Glentoran have been on a persistent run of goalscoring form, hitting the target in one hundred percent of their last 6 matches.

They’ve managed to rack up 12 during that period while seeing the number of goals scored against them stand at 4.

Looking at the pre-match facts, Glentoran:

Following on from tasting defeat last time out to Crusaders in Premiership competition, Dungannon Swifts will be hoping to turn things around here.

A tendency of at least one side getting a clean sheet in games featuring Dungannon Swifts has become noticeable in recent matches. Looking at their last six meetings shows that it has happened 5 times. During those clashes, their opponents have hit a goal tally of 12 while Dungannon Swifts have scored 6. That sort of trend won’t necessarily be continued here, though.

A study of their past head to head results stretching back to 23/11/2019 shows that these encounters have not been happy ones for Dungannon Swifts. They have not been able to register any wins whatsoever while Glentoran have been superior, winning in 100% of those match-ups.

The previous league match featuring these sides was Premiership match day 1 on 28/08/2021 and the score finished Dungannon Swifts 2-3 Glentoran.

The referee was Shane Andrews.

The Glentoran manager Mick McDermott will be thankful to have no fitness concerns to speak of coming into this match owing to a completely healthy group ready to go.

With a fully healthy squad available for selection, the Dungannon Swifts manager Dean Shiels has zero fitness worries whatsoever before this clash.

Glentoran will most probably be able to create a good number of chances & successful shots on target.

However, Dungannon Swifts might well find it a difficult task getting goals but we can see them seeing enough of the ball to score, too.

Our selection here is for a controlled 3-1 win for Glentoran by the time that the referee blows the final whistle. 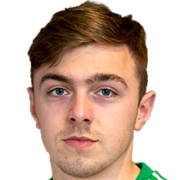 Mostly used in the Striker position, Robbie McDaid was born in N. Ireland. After having made a senior debut playing for Glenavon in the 2012 - 2013 season, the dangerous Forward has contributed 2 league goals in this Premiership 2021 - 2022 campaign to date coming from a total of 14 appearances.

While we have made these predictions for Glentoran v Dungannon Swifts for this match preview with the best of intentions, no profits are guaranteed. Always gamble responsibly, and with what you can afford to lose. Good luck with your selections.