Our full set of predictions, statistics and match poll for Eintracht Frankfurt v Hertha Berlin can be seen below (including the best match odds).

Their prior results show that Eintracht Frankfurt:

Since suffering a loss in their previous game against Freiburg in Bundesliga 1 competition, Hertha Berlin and their travelling supporters will be hoping that they can get a better result in this one.

The stats tell the story, and Hertha Berlin have been scored against in 6 of their last 6 matches, with opponents netting 17 goals in total. In defence, Hertha Berlin have some weaknesses to address. Historical results aside, we will just have to wait and see if that trend shall be sustained in this upcoming game or not.

Going into this one, Hertha Berlin haven't beaten Eintracht Frankfurt when having played them away from home in the previous 3 league matches.

Checking on their prior head to head meetings stretching back to 08/12/2018 tells us that Eintracht Frankfurt have won 3 of these games & Hertha Berlin 1, with the number of draws standing at 2.

An aggregate of 18 goals were produced between them in this period, with 12 of them for Eintracht and 6 coming from Hertha. That’s an average goals per game of 3.

The last league match between these sides was Bundesliga 1 match day 19 on 30/01/2021 which ended up with the score at Eintracht Frankfurt 3-1 Hertha Berlin.

On that occasion, Eintracht Frankfurt had 61% possession and 15 attempts at goal with 7 on target. The goalscorers were André Silva (67', 95') and Martin Hinteregger (84').

Hertha Berlin got 8 shots at goal with 3 of them on target. Krzysztof Piątek (66') was the scorer.

For this match, we think that Hertha Berlin should be able to find the back of the net against this Eintracht Frankfurt side, although that isn’t expected to be as many as they will have scored against them.

We reckon that it will be a 2-1 victory for Eintracht Frankfurt when all is said and done. Hopefully this is a good one. 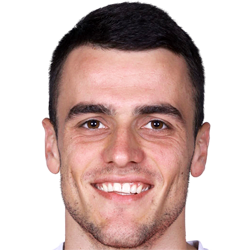 Generally played in the Left Attacking Midfielder position, Filip Kostić was born in Kragujevac , Serbia. Having made a first senior appearance for FC Groningen in the 2012 - 2013 season, the gifted Midfielder has managed 2 league goals in the Bundesliga 2021 - 2022 campaign so far from a total of 6 appearances.

While we have made these predictions for Eintracht Frankfurt v Hertha Berlin for this match preview with the best of intentions, no profits are guaranteed. Always gamble responsibly, and with what you can afford to lose. Good luck!