Elche CF take on visiting rivals Osasuna at The Estadio Manuel Martínez Valero in the La Liga match on Sunday.

All of our predictions, stats and the user poll for Elche CF v Osasuna are shown below - as well as the best betting odds.

Elche CF go into this match coming off the back of a 1-1 La Liga draw vs Cádiz.

In that match, Elche CF had 50% possession and 12 shots on goal with 5 of them on target. The only player on the scoresheet for Elche CF was Ezequiel Ponce (81'). Cádiz got 16 shots at goal with 3 on target. Brian Ocampo (7') was the scorer for Cádiz.

A recurring feature of more recent Elche CF games is the number of results with a nil in them.

From their prior six clashes before this one, in 5 of them a wager on both teams scoring would've been a loser.

Going into this game, the form guide shows that Elche CF:

In their previous game, Osasuna drew 2-2 in the Copa del Rey match with Real Betis.

In the course of their six most recent matches, Jagoba Arrasate's Osasuna have fired home 8 times thus earning them the goals scored per game average of 1.33.

Analysis of their past results shows that Osasuna:

A review of their most recent head to head meetings going back to 26/08/2018 tells us that Elche CF have won 0 of these & Osasuna 2, with the number of draws standing at 4.

A combined sum of 15 goals were scored between the two sides during those clashes, with 6 for Los Franjiverdes and 9 being from Los Rojillos. That’s an average goals per game figure of 2.5.

On that occasion, Elche CF had 57% possession and 11 attempts on goal with 4 of them on target. The scorer was Pere Milla (84').

There aren’t many selection issues, with just a single fitness concern for the Elche CF manager Pablo Machín to be concerned with from an otherwise complete squad. Álex Collado (Tear in the abductor muscle) will miss out.

Osasuna manager Jagoba Arrasate has to choose from a squad that has some fitness concerns. Nacho Vidal (Hamstring Injury) and Rubén Peña (Torn Muscle Fibre) will not be playing here.

We believe that Elche CF will really need to work well to register a score against this Osasuna team who should be able to get on the scoresheet themselves in a winning performance.

We’re therefore tipping a very even contest with a 0-1 winning margin for Osasuna when all is said and done. 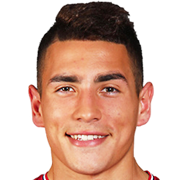 Regularly deployed in the Striker position, Ezequiel Ponce was born in Rosario, Argentina. Having played his first senior match for Newell´s Old Boys in the 2013 - 2014 season, the dangerous Forward has contributed 3 league goals in the LaLiga 2022 - 2023 season so far from a total of 16 appearances.

While we have made these predictions for Elche CF v Osasuna for this match preview with the best of intentions, no profits are guaranteed. Always gamble responsibly, and with what you can afford to lose. Best of luck with your selections.