Lugano take on visiting side FC Vaduz at Stadio Cornaredo in the Super League game on Saturday.

Our Lugano v FC Vaduz tips, poll and stats can be seen in full below including the latest game odds.

Lugano will be hoping to return to winning ways here after the 3-0 Super League defeat in their last game at the hands of FC Zürich.

A recurring aspect of more recent Lugano games is the number of nil scores.

Taking their previous 6 matches leading up to this one, in 5 of them a wager on both teams scoring would have been a loser.

Going into this one, Lugano have not lost a league tie with FC Vaduz in their last 5 matches.

After a loss in their previous game against FC Luzern in Super League action, FC Vaduz will be hoping to turn things around here.

In that match, FC Vaduz managed 49% possession and 12 shots at goal with 4 on target. The only player on the scoresheet for FC Vaduz was Gabriel Lüchinger (13'). On the other side, FC Luzern got 15 shots on goal with 6 on target. Dejan Sorgić (6') and Marco Burch (12') scored for FC Luzern.

The numbers tell their own story, and FC Vaduz have been scored against in 5 of their last 6 matches, seeing opposing sides hit 7 goals overall. In defence, Residenzler have not been doing too well. With no two games being the same, we will just have to wait and see whether the trend shall continue on in this next game.

Taking a look at their past results, FC Vaduz:

Inspecting their prior head to head meetings stretching back to 27/11/2016 tells us that Lugano have won 2 of them and FC Vaduz 1, with the number of drawn games being 3.

In all, 18 goals were shared by the two clubs throughout the course of those matches, with 9 of them from Lugano and 9 netted by Residenzler. This gives an average number of goals per game equal to 3.

The last league game featuring these clubs was Super League match day 25 on 14/03/2021 when the final score was FC Vaduz 0-3 Lugano.

Our feeling is that FC Vaduz will likely create enough chances to find the back of the net against this Lugano outfit, although that is unlikely to be enough to avoid a loss.

We’re predicting a 2-1 victory for Lugano at the end of this one. It will be interesting to see how this one goes. 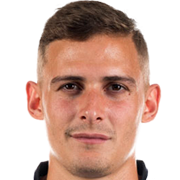 Typically played in the Left Wing position, Mattia Bottani was born in Switzerland. After having made a senior debut playing for Lugano in the 2015 - 2016 season, the goalscoring Forward has scored 6 league goals in the Super League 2020 - 2021 season to date from a total of 27 appearances.

We have made these Lugano v FC Vaduz predictions for this match preview with the best intentions, but no profits are guaranteed. Please always gamble responsibly, only with money that you can afford to lose. We wish you the best of luck.