Frosinone will face off against the visiting Lecce at Stadio Benito Stirpe in this Serie B clash on Saturday.

All Frosinone v Lecce match predictions, user poll and stats are shown below - as well as up-to-date odds.

Frosinone will want to continue from where they left off last time out with a 1-4 Serie B triumph against Benevento.

In that match, Frosinone managed 55% possession and 19 shots on goal with 8 of them on target. For Frosinone, the goals were scored by Karlo Lulić (35', 45'), Gabriel Charpentier (50') and Emanuele Cicerelli (75'). Benevento had 14 shots at goal with 8 on target. Giuseppe Di Serio (78') scored for Benevento.

It has been a rare occasion in recent games where Frosinone have kept a clean sheet. In fact, Frosinone have been scored against in 6 of their previous 6 clashes, shipping 6 goals in the process.

Their previous form shows that Frosinone:

Lecce come into this meeting after a 4-0 Serie B win with the eclipse of Parma in their last game.

A succession of hard-working displays by the Lecce defence has resulted in their ‘goals against’ tally amounting to 3 from their previous 6 fixtures in total. During the same period of time, their own attack force has managed to score 12. That kind of trend won’t necessarily be sustained here, though.

Their past results show that Lecce:

A review of their most recent head to head meetings stretching back to 06/09/2009 shows that Frosinone have won 2 of these & Lecce 3, with the number of drawn results being 1.

A total of 21 goals were produced between them throughout the course of those matches, with 8 of them from Canarini and 13 being from Giallorossi. This gives an average number of goals per game equal to 3.5.

The last league match featuring these clubs was Serie B match day 30 on 20/03/2021 when the final score was Frosinone 0-3 Lecce.

On that day, Frosinone managed 56% possession and 13 attempts on goal with 4 of them on target.

The Frosinone boss Fabio Grosso does not have any fitness worries at all coming into this match thanks to a fully injury-free group available for selection.

Owing to a fully healthy group available for selection, the Lecce boss Marco Baroni has no fitness worries to report before this clash.

In this game, Lecce have the capability to breach the defence of this Frosinone lineup, although it probably won’t be as many as they will have scored against them.

We reckon that it will be a close game with a 2-1 victory for Frosinone at the end of the 90 minutes. 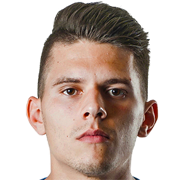 Typically taking to the field in the Centre Midfield position, Karlo Lulić was born in Croatia. Having made a first senior appearance for NK Osijek in the 2012 - 2013 season, the accomplished Midfielder has scored a sum of 2 league goals in this Serie B 2021 - 2022 season so far from a total of 7 appearances.

We have made these Frosinone v Lecce predictions for this match preview with the best intentions, but no profits are guaranteed. Please always gamble responsibly, only with money that you can afford to lose. Best of luck.