Larne journey to Mourneview Park on Tuesday for the Premiership meeting with home team Glenavon.

View all Glenavon v Larne tips, stats and our pre-match poll below (including the best match odds).

Glenavon enter this match coming off the back of a 0-0 Premiership draw against Linfield.

It’s been all too rare in recent games that Glenavon have managed to hold out for a full 90 minutes. It will be a concern for them that Glenavon have failed to prevent opponents from scoring in 5 of their previous 6 clashes, giving up 9 goals along the way.

In the game prior to this, Larne drew 0-0 in the Premiership tie with Carrick Rangers.

During their six latest matches, Tiernan Lynch's Larne have found the net a total of 11 times, giving them a goals per game average of 1.83.

Looking over their past head to head results going back to 07/12/2019 shows that these fixtures have not been fruitful for Glenavon. They’ve not been able to register any victories at all while Larne have remained in the ascendancy, running out winners in 83 per cent of those matches played.

A sum of 20 goals were scored between the two sides during those clashes, with 6 from The Lurgan Blues and 14 being from Larne. That’s an average goals per game of 3.33.

The Glenavon manager Gary Hamilton will be grateful to have no fitness worries whatsoever coming into this game with a fully injury-free group available to choose from.

Thanks to a fully healthy squad available for selection, the Larne boss Tiernan Lynch has zero fitness concerns to report before this clash.

When taking all factors into account, Glenavon will surely be able to score against this Larne side, but a single goal isn’t likely to be as many as they’ll concede.

Therefore, we think that it’s going to be a narrow 1-2 winning score for Larne at full-time. Let’s see what happens here. 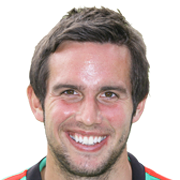 Typically deployed in the Striker position, Andrew Waterworth was born in N. Ireland. After making a first senior appearance for Hamilton Academical in the 2007 - 2008 season, the dangerous Forward has bagged 2 league goals in the Premiership 2021 - 2022 season so far from a total of 4 appearances.

We have made these Glenavon v Larne predictions for this match preview with the best intentions, but no profits are guaranteed. Please always gamble responsibly, only with money that you can afford to lose. Good luck with your selections.