Granada will host visiting opponents Ibiza at The Estadio Nuevo Los Cármenes in this La Liga 2 tie on Saturday.

Scroll down for all of our predictions, poll and stats for the Granada v Ibiza game - plus the latest betting odds.

Granada will be wanting a better result here following the 3-1 La Liga 2 losing effort in their last game against Levante.

Granada have really struggled up front of late. Their ‘goals for’ figure stands at just 4 versus opponents during the course of their last six fixtures. In those meetings, Granada have also seen the number of goals that have gone against them come to 6.

Since tasting defeat last time out to UD Las Palmas in La Liga 2 action, Ibiza will be aiming to make amends here.

Looking at their form, and Ibiza have been scored against in 5 of their last 6 matches, seeing their opponents hit 11 goals in total. In defence, Ibiza seem to have a bit of a soft underbelly. That kind of trend might not be continued into this next game, of course.

Heading into this fixture, Ibiza haven’t won away from home in the past 8 league matches. Their travelling support will be needed here, for sure.

That time, Ibiza managed 54% possession and 11 attempts at goal with 0 on target. Their only player to score was David Goldar (50' Own goal).

On the other side, Granada got 11 attempts at goal with 3 of them on target. Matías Arezo (73') scored.

Nearly everyone is up for selection, with just the sole fitness concern for the Granada boss Paco López to be concerned with from of an almost fully healthy group of players. Raúl Torrente (Cruciate Ligament Rupture) will miss out.

With a completely healthy squad to choose from, the Ibiza manager Lucas Alcaraz has zero fitness worries whatsoever ahead of this clash.

We’re thinking that Granada look set to get the goals that they need when they face Ibiza, who might well find it difficult to score themselves.

Our tip is for a controlled 2-0 winning score for Granada at full-time. 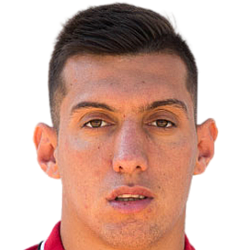 Regularly taking to the field in the Left Wing position, Myrto Uzuni was born in Berat, Albania. Having made a first senior appearance for Ferencvárosi TC in the 2020 - 2021 season, the skilful Forward has hit 12 league goals in the LaLiga2 2022 - 2023 campaign so far in a total of 21 appearances.

We have made these Granada v Ibiza predictions for this match preview with the best intentions, but no profits are guaranteed. Please always gamble responsibly, only with money that you can afford to lose. Best of luck with your selections.