The Superettan game at Borås Arena on Wednesday sees hosts Norrby IF take on Halmstads BK.

For all of our match predictions, pre-game poll and statistics for Norrby IF v Halmstads BK, scroll down - as well as up-to-date odds.

Norrby IF prepare for this game following on from a 3-3 Superettan drawn result against GAIS.

It has not been often in recent times where Norrby IF have managed to hold out for a full 90 minutes. It will be a concern for them that Norrby have been scored against in 6 of their previous 6 clashes, shipping 11 goals during that time. That kind of trend might not be carried forward into this next game, of course.

Taking a look at their past results, Norrby IF:

Halmstads BK will come into the encounter following a 2-0 Superettan win to defeat IK Brage in their last outing.

For Halmstads BK, the goals were scored by Emil Tot Wikström (19') and Mikael Boman (33').

A series of very capable showings by the Halmstads BK defenders has resulted in the number of goals they’ve conceded standing at 4 from their last 6 fixtures overall. Over that same time, their own forwards have managed to score 13.

Norrby IF boss Mak Lind will be grateful not to have any fitness concerns to speak of ahead of this match owing to a fully healthy squad to pick from.

Owing to an otherwise healthy squad, there’s just the one fitness problem for the Halmstads BK gaffer Magnus Haglund to be concerned with. Viktor Ljung (Cruciate Ligament Injury) won’t be playing here.

We’ve got the feeling that Norrby IF will really need to work well to be putting a goal past this Halmstads BK team who will likely do enough to score at the other end and edge ahead.

Therefore, we predict a hard-fought 0-1 winning margin for Halmstads BK when the referee blows for full-time. 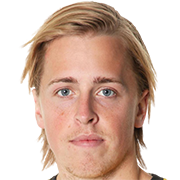 Regularly taking to the field in the Striker position, Robin Strömberg was born in Sweden. Having played his first senior match for Mjällby AIF in the 2011 season, the goalscoring Forward has hit 5 league goals in this Superettan 2020 campaign so far from a total of 21 appearances.

While we have made these predictions for Norrby IF v Halmstads BK for this match preview with the best of intentions, no profits are guaranteed. Always gamble responsibly, and with what you can afford to lose. Good luck with your selections.