To see all of our predictions, user poll & stats for Mladá Boleslav v Karviná, scroll down - along with the latest match odds.

Mladá Boleslav won’t want a repeat of their last result here after the 2-1 First League loss in their previous game against Tescoma Zlín.

The only player to score from Mladá Boleslav was Ladislav Takács (90'). Tomáš Poznar (51') and Youba Dramé (78') scored for Tescoma Zlín.

Going into this game, the form guide shows that Mladá Boleslav:

In their last game, Karviná drew 1-1 in the First League match with Slovan Liberec.

The only scorer from Karviná was Christián Herc (60'). Imad Rondić (57') was the scorer for Slovan Liberec.

Looking at their form, and Karviná have been scored against in 6 of their last 6 games, seeing their opponents hit 13 goals in all. In defence, Karviná can certainly do much better. With no two games being the same, we’ll just have to find out whether such a trend shall persist here in this game.

Looking at their past form shows that Karviná:

A glance at their prior head-to-head meetings dating back to 17/02/2018 shows us that Mladá Boleslav have won 2 of them & Karviná 1, with the tally of drawn matches standing at 3.

15 goals were yielded between them in this period, with 8 of them from Mladá Boleslav and 7 belonging to Karviná. That’s an average goals per game of 2.5.

The last league game featuring the two was First League match day 5 on 26/09/2020 which ended up with the score at Karviná 0-0 Mladá Boleslav.

The referee was Alex Denev.

With a fully healthy squad available to choose from, Karviná boss Juraj Jarábek does not have any fitness worries whatsoever coming into this game.

We’ve got the feeling that Karviná have the ability to score against this Mladá Boleslav team, however it isn’t expected to be as many as they will have scored against them.

We are anticipating a 2-1 win for Mladá Boleslav after the 90. It really should be an interesting one. 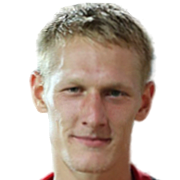 Mostly used in the Striker position, Michal Škoda was born in Prague, Czech Republic. Having made a first senior appearance for FC Brno in the 2012 - 2013 season, the skilful Forward has scored a sum of 4 league goals in the First League 2020 - 2021 season to date coming from a total of 15 appearances.

While we have made these predictions for Mladá Boleslav v Karviná for this match preview with the best of intentions, no profits are guaranteed. Always gamble responsibly, and with what you can afford to lose. Best of luck with your selections.