KV Mechelen host visitors KV Kortrijk at AFAS-Stadion in the First Division A fixture on Saturday.

View all KV Mechelen v KV Kortrijk tips, stats and our pre-match poll below - as well as the best betting odds.

KV Mechelen will be looking to improve on their last outing here following the 2-0 First Division A loss in their previous game against Standard Liège.

Under three goals per match were recorded in 5 of the past 6 meetings where KV Mechelen have been involved. Breaking down the goal attribution from this period, their opponents scored a total of 6 while KV Mechelen totted up 5. That sort of pattern isn’t assured to be carried forward here, however.

Analysis of their past results shows that KV Mechelen:

KV Kortrijk will go into this encounter after a 3-2 First Division A win with the defeat of Seraing in their most recent match.

Looking at their form, and KV Kortrijk have been scored against in 5 of their last 6 games, with opponents netting 8 goals in total. At the back, KV Kortrijk have some weaknesses to address.

A glance at their most recent head-to-head clashes going back to 17/10/2020 tells us that KV Mechelen have won 4 of them & KV Kortrijk 1, with the number of drawn games being 1.

In our opinion, KV Kortrijk will have to play well to register a score against this KV Mechelen team who will likely score at least once to put them ahead.

That’s why our selection here is for a good tussle with a 1-0 winning score for KV Mechelen at the end of this one. 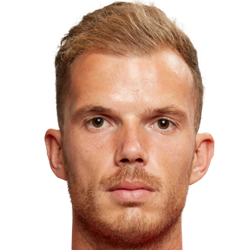 Mostly taking up the Centre Midfield position, Geoffry Hairemans was born in Wilrijk, Belgium. After having made a senior debut playing for De Graafschap in the 2009 - 2010 season, the talented Midfielder has struck 4 league goals in the Pro League 2022 - 2023 campaign to date in 19 appearances.

We have made these KV Mechelen v KV Kortrijk predictions for this match preview with the best intentions, but no profits are guaranteed. Please always gamble responsibly, only with money that you can afford to lose.