Return to this page a few days before the scheduled game when this expired prediction will be updated with our full preview and tips for the next match between these teams.
Full-Time Result Prediction
👉
Levadiakos to Win

The Super League match at Levadia Municipal Stadium on Sunday sees home side Levadiakos prepare for the visit of opponents, Lamia.

View all Levadiakos v Lamia tips, stats and our pre-match poll below - plus the latest match odds.

Levadiakos haven’t made the most of their chances in more recent games. Their goals record equals just 4 vs opponents during their last six outings. In those games, Levadiakos have also seen the tally of goals that have gone against them come to 7.

In their previous fixture, Lamia drew 1-1 in the Super League match with Atromitos.

In that game, Lamia managed 42% possession and 10 shots at goal with 3 on target. The only player to score for Lamia was Georgios Kornezos (47'). At the other end, Atromitos had 10 attempts on goal with 5 on target. Dorin Rotariu (8') scored for Atromitos.

It has become apparent that Lamia have had real problems scoring goals in their past six clashes, recording the poor return of only 3. In those matches, Kyanólefki have also seen the overall goal aggregate of opposing teams equal 14. We will have to find out if that trend will be continued on in this game.

Ahead of this meeting, Lamia are without a win away from home in their last 10 league games. A poor run.

The last league game between these clubs was Super League match day 6 on 01/10/2022 which ended up with the score at Lamia 1-0 Levadiakos.

In that match, Lamia had 57% possession and 15 shots at goal with 3 of them on target. The scorer was Richmond Boakye (61').

Levadiakos got 8 attempts on goal with 2 of them on target.

The match was refereed by Efstathios Gortsilas.

The Levadiakos boss Jasminko Velić will be happy not to have any fitness concerns to speak of before this game thanks to a fully healthy group available for selection. The players who will not be able to play in this game through being suspended are Dimitrios Konstantinidis, Georgios Vrakas, Konstantinos Doumtsios and Marios Vichos.

Due to a completely injury-free squad available to select from, the Lamia manager Savvas Pantelidis does not have any fitness worries whatsoever coming into this game. Tomás De Vincenti cannot play in this game through suspension.

Lamia will have their work cut out to find the net against this Levadiakos side who we reckon should get the win and a maybe even keep a clean sheet as well.

We’re therefore predicting a highly competitive game with a 1-0 victory for Levadiakos when the full-time whistle blows. 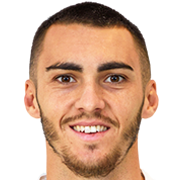 Generally played in the Right Wing position, Thierry Moutinho was born in Geneva, Switzerland. After making a first senior appearance for Servette FC in the 2011 - 2012 season, the talented Forward has scored a sum of 2 league goals in the Super League 2022 - 2023 season so far in 15 appearances.

We have made these Levadiakos v Lamia predictions for this match preview with the best intentions, but no profits are guaranteed. Please always gamble responsibly, only with money that you can afford to lose. Best of luck.