Return to this page a few days before the scheduled game when this expired prediction will be updated with our full preview and tips for the next match between these teams.
Full-Time Result Prediction
👉
Portland Timbers to Win

All Portland Timbers v San Jose Earthquakes match predictions, user poll and stats are shown below - as well as the best betting odds.

Portland Timbers have been on a persistent run of goalscoring form, finding the back of the net in each and every one of their last 6 games.

They’ve managed to rack up 12 during that period while seeing the number of goals scored against them stand at 5. Even so, time will tell whether such a trend might be maintained in this next match or not.

Following on from being beaten in their last game against Houston Dynamo in MLS action, San Jose Earthquakes will be aiming to make amends here.

Inspecting their prior head to head meetings stretching back to 20/09/2020 shows us that Portland Timbers have won 4 of these & San Jose Earthquakes 1, with the tally of draws being 1.

A sum of 21 goals were scored between them in this period, with 16 of them for The Timbers and 5 netted by Quakes. The average goals per game has been 3.5.

The previous league fixture between these clubs was MLS match day 17 on 19/05/2022 when the final score was San Jose Earthquakes 3-2 Portland Timbers.

That day, San Jose Earthquakes managed 61% possession and 17 attempts on goal with 4 of them on target. Goals were scored by Jackson Yueill (31') and Jamiro Monteiro (44', 80').

At the other end, Portland Timbers had 9 attempts at goal with 5 of them on target. Cristhian Paredes (18') and Bill Tuiloma (56') scored.

The match was refereed by Lukasz Szpala.

Looking at personnel, there is just one fitness concern for the Portland Timbers boss Giovanni Savarese to contend with from a near full-strength group. Diego Gutiérrez (Foot surgery) is out of contention.

Thanks to a mainly full-strength group of players, there is only a single fitness worry for the San Jose Earthquakes manager Alex Covelo to be concerned with. George Asomani (Hip Injury) won’t be playing here.

It certainly seems that San Jose Earthquakes will have a difficult task to break down a Portland Timbers team who look set to boss most aspects of this game if it turns out as we expect.

We’re therefore predicting a convincing 3-0 margin for Portland Timbers by the conclusion of the match. 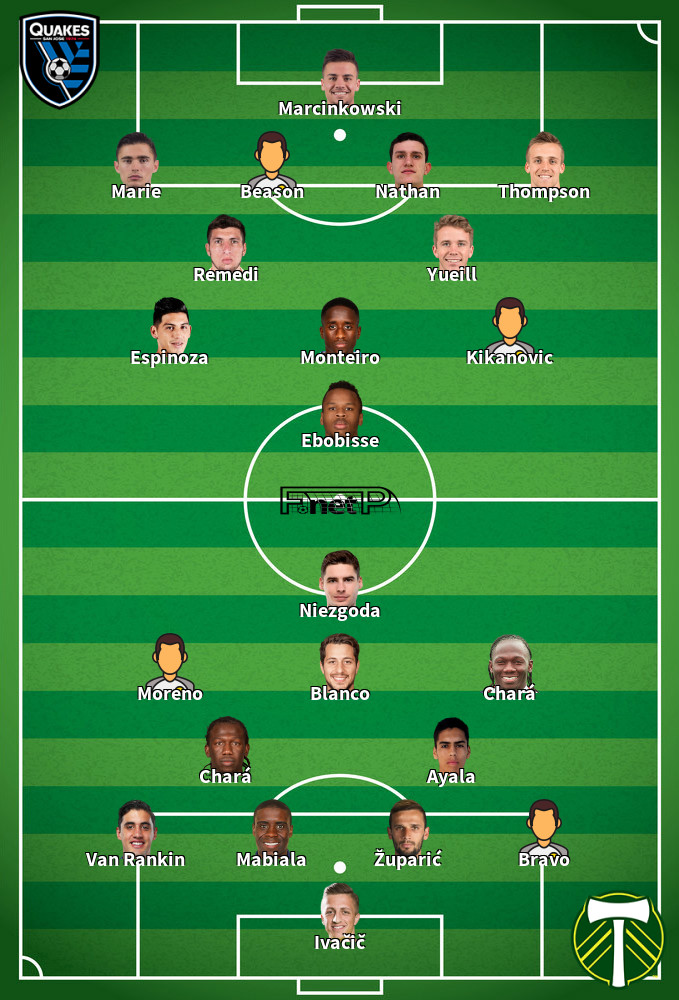 While we have made these predictions for Portland Timbers v San Jose Earthquakes for this match preview with the best of intentions, no profits are guaranteed. Always gamble responsibly, and with what you can afford to lose. Best of luck.