Return to this page a few days before the scheduled game when this expired prediction will be updated with our full preview and tips for the next match between these teams.
Full-Time Result Prediction
👉
Spezia to Win

The Serie A game at Stadio Alberto Picco on Saturday sees home side Spezia playing against Salernitana.

Our tips, poll and stats for Spezia v Salernitana can all be found here (including the best match odds).

Spezia will be hoping to bounce back here following a 4-0 Serie A defeat in their last game at the hands of Hellas Verona.

Three or more goals per game were seen in 5 of the past 6 meetings where Spezia have been involved. Opposing sides scored 17 of them in this period whereas Spezia managed to get a total of 6.

A look at their previous results shows us that Spezia:

Salernitana head into the clash following a 1-0 Serie A win against Genoa in their most recent fixture.

The numbers tell their own story, and Salernitana have been scored against in 5 of their last 6 matches, with opponents netting 12 goals in all. At the back, Salernitana have not been doing too well. Such a trend might not be sustained here, though.

Coming into this clash, Salernitana are without a win away from home in their last 3 league games.

A glance at their past head-to-head clashes going back to 23/09/2017 shows us that Spezia have won 4 of these and Salernitana 2, with the tally of draws being 0.

A sum of 15 goals were shared by the two clubs during those clashes, with 9 of them for Spezia and 6 coming from I granata. The average number of goals per game works out to 2.5.

The previous league contest between these clubs was Serie B match day 38 on 31/07/2020 and the score finished Salernitana 1-2 Spezia.

In that game, Salernitana had 39% possession and 13 shots at goal with 5 of them on target. Their only player to score was Cedric Gondo (30').

We’re thinking that Salernitana will likely create enough chances to find the back of the net against this Spezia team, but it realistically won’t be as many as they’ll concede.

Our tip is for a close game with a 2-1 winning score for Spezia after the 90. It will be interesting to see how this one goes. 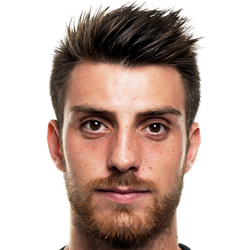 Mostly deployed in the Centre Midfield position, Simone Bastoni was born in La Spezia, Italy. After having made a senior debut playing for Spezia in the 2018 - 2019 season, the talented Midfielder has managed to score 2 league goals in the Serie A 2021 - 2022 season to date from a total of 7 appearances.

We have made these Spezia v Salernitana predictions for this match preview with the best intentions, but no profits are guaranteed. Please always gamble responsibly, only with money that you can afford to lose. Best of luck with your selections.