Würzburger Kickers host visiting side Darmstadt at flyeralarm Arena in the Bundesliga 2 tie on Tuesday.

All Würzburger Kickers v Darmstadt game predictions, stats and user poll are shown below - as well as up-to-date odds.

Würzburger Kickers will be hoping for a better result after the 4-0 Bundesliga 2 losing effort in their last game against St. Pauli.

It’s been seldom in recent games that Würzburger Kickers have shown defensive steel. In fact, Würzburg have been scored against in 6 of their previous 6 clashes, letting in 10 goals in the process. That kind of pattern might not be continued here, of course.

In their previous game, Darmstadt drew 2-2 in the Bundesliga 2 match with Greuther Furth.

In that match, Darmstadt had 42% possession and 10 attempts on goal with 3 of them on target. For Darmstadt, the goals were scored by Tobias Kempe (2') and Serdar Dursun (40'). On the other side, SpVgg Greuther Fürth had 17 attempts at goal with 9 on target. Julian Green (69') and David Raum (75') scored for Greuther Furth.

In their previous 6 clashes, Darmstadt have bagged the sum of 13 goals. Darmstadt have also managed to score in every single one of those games. During that period, they’ve seen 9 goals scored by their opponents.

Heading into this contest, Darmstadt are unbeaten in their last 3 away league matches.

The last league contest between the two was Bundesliga 2 match day 13 on 19/12/2020 which ended up with the score at Darmstadt 2-0 Würzburger Kickers.

There is just a single fitness concern for the Würzburger Kickers manager Ralf Santelli to be concerned with due to a largely intact group of players. Hendrik Bonmann (Muscle Injury) is sidelined.

Our assessment is that Würzburger Kickers have the ability to find the back of the net against this Darmstadt lineup, but a single goal possibly won’t be good enough.

We’re therefore expecting both teams to score in a 1-2 winning score for Darmstadt when all is said and done. There looks to be little in this one. 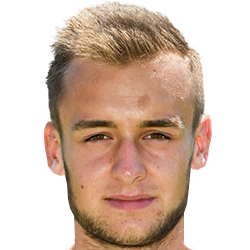 Normally used in the Central Attacking Midfielder position, David Kopacz was born in Iserlohn, Poland. After having played his first senior match for Górnik Zabrze in the 2019 - 2020 season, the accomplished Midfielder has contributed 3 league goals in the Bundesliga 2 2020 - 2021 campaign to date in 28 appearances.

While we have made these predictions for Würzburger Kickers v Darmstadt for this match preview with the best of intentions, no profits are guaranteed. Always gamble responsibly, and with what you can afford to lose. Good luck if you do place a bet today.