Return to this page a few days before the scheduled game when this expired prediction will be updated with our full preview and tips for the next match between these teams.
Full-Time Result Prediction for Swindon Town vs Scunthorpe United
Swindon Town to Win
Scunthorpe United will visit The Energy Check County Ground on Saturday for the League Two meeting with home team Swindon Town.

For this match, we think that Swindon Town will probably score at least once when they play Scunthorpe United, who may well find it hard to score. We’re tipping a pretty comfortable 2-0 winning score for Swindon Town come full-time. View all Swindon Town v Scunthorpe United tips, stats and our pre-match poll below (plus the best game odds). 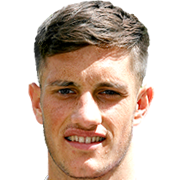 Regularly used in the Striker position, Jerry Yates was born in Doncaster, England. After having made a senior debut playing for Rotherham United in the 2014 - 2015 season, the accomplished Forward has scored a sum of 12 league goals in this League Two 2019 - 2020 campaign so far coming from a total of 27 appearances.

While we have made these predictions for Swindon Town v Scunthorpe United for this match preview with the best of intentions, no profits are guaranteed. Always gamble responsibly, and with what you can afford to lose.