FK Příbram journey to Lokotrans Aréna on Sunday for the First League fixture with home side Mladá Boleslav.

Our full set of predictions, statistics and match poll for Mladá Boleslav v FK Příbram can be seen below - plus the latest match odds.

Mladá Boleslav enter this match after a 2-2 First League drawn match versus Pardubice.

For Mladá Boleslav, goals were scored by Tomáš Ladra (54') and Ladislav Takács (80'). Emil Tischler (5') and Tomáš Čelůstka (73') scored for Pardubice.

Coming into this clash, Mladá Boleslav have left without a victory over FK Příbram in their last 2 league games.

Looking at their form, and FK Příbram have been scored against in 5 of their last 6 games, seeing their opponents hit 16 goals in total. In defence, Příbram could really do with shoring things up. Let’s find out if that trend can be continued on in this game.

Going into this encounter, FK Příbram are without a win away from home in their last 14 league games. Their travelling supporters must be so depressed.

Looking at the statistics for their head to head duels stretching back to 04/12/2016, there has been little to separate the clubs with Mladá Boleslav winning 2 of those games, FK Příbram 2 and 2 being drawn after 90 minutes of play.

A combined sum of 18 goals were shared by the two clubs in these games, with 11 for Mladá Boleslav and 7 created by Příbram. That’s an average goals per game of 3.

The last league clash between these sides was First League match day 9 on 28/11/2020 which finished with the scoreline of FK Příbram 2-1 Mladá Boleslav.

The match was refereed by Pavel Rejžek.

It’s a low absenteeism rate, with just the lone fitness concern for the Mladá Boleslav manager Karel Jarolím to be concerned with from an otherwise fully-primed group of players. Aleksey Tataev (Knee inflammation) is sidelined.

Owing to a fully injury-free squad available for selection, FK Příbram boss Jozef Valachovič doesn’t have any fitness concerns at all coming into this clash.

In our opinion, Mladá Boleslav will most probably dominate on the ball and be rewarded with decent chances.

However, FK Příbram might well find it a difficult task to score but do we see them managing to get on the scoresheet here.

Our selection here is for a comfortable 3-1 win for Mladá Boleslav by the time that the referee blows the final whistle. 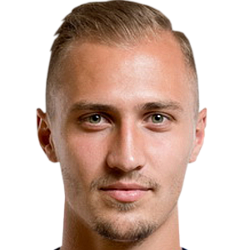 Customarily taking to the field in the Striker position, Jiří Klíma was born in Czech Republic. Having made his senior debut playing for Jihlava in the 2015 - 2016 season, the gifted Forward has accumulated 4 league goals in the First League 2020 - 2021 season to date from a total of 9 appearances.

We have made these Mladá Boleslav v FK Příbram predictions for this match preview with the best intentions, but no profits are guaranteed. Please always gamble responsibly, only with money that you can afford to lose. Good luck!