AC Milan come up against visiting club Napoli at Stadio Giuseppe Meazza in this Serie A game on Sunday.

View all of the AC Milan v SSC Napoli predictions, poll and stats below - plus the latest betting odds.

AC Milan, following on from their previous result, will be hoping for more of the same after a 3-1 Champions League success against Dinamo Zagreb.

In that match, AC Milan had 57% possession and 17 shots at goal with 7 on target. For AC Milan, goals were scored by Olivier Giroud (45'), Alexis Saelemaekers (47') and Tommaso Pobega (77'). Dinamo Zagreb had 7 shots on goal with 3 of them on target. Mislav Oršić (56') was the scorer for Dinamo Zagreb.

In their preceding six games, Stefano Pioli's AC Milan have seen rewards for their attempts on goal a combined total of 11 times resulting in an average number of goals scored per match of 1.83.

Ahead of this meeting, AC Milan are unbeaten in their previous 11 home league matches. It's been impressive.

Napoli go into this encounter after a 0-3 Champions League win vs Rangers in their previous fixture.

A run of accomplished showings by the SSC Napoli defensive players has resulted in the number of goals they’ve conceded standing at 3 from their previous 6 outings in total. In that period, the number of goals that they have scored themselves is 11. Putting that to one side, we must now wait to see whether that trend will be replicated here in this game.

If we look at their past head to head meetings stretching back to 23/11/2019, both clubs have shared the honours with AC Milan winning 2 of those games, Napoli 2 and 2 being drawn in normal time.

In all, 13 goals were scored between the two sides in these games, with 7 from i Rossoneri and 6 for Partenopei. That is an average goals per game value of 2.17.

The previous league clash featuring these sides was Serie A match day 28 on 06/03/2022 when it finished SSC Napoli 0-1 AC Milan.

On that day, SSC Napoli managed 60% possession and 9 shots on goal with 2 on target.

Ante Rebic (Back trouble), Divock Origi (Inflammation), Zlatan Ibrahimovic (Knee Surgery) and Alessandro Florenzi (Hamstring Injury) won’t be available for AC Milan gaffer Stefano Pioli. Rafael Leão will not be able to play in this game through being suspended.

For this match, we think that SSC Napoli certainly have the ability to score against this AC Milan outfit, but that may not be as many as they will have scored against them.

Our tip is for a 2-1 victory for AC Milan when all is said and done. Could easily see this go either way. 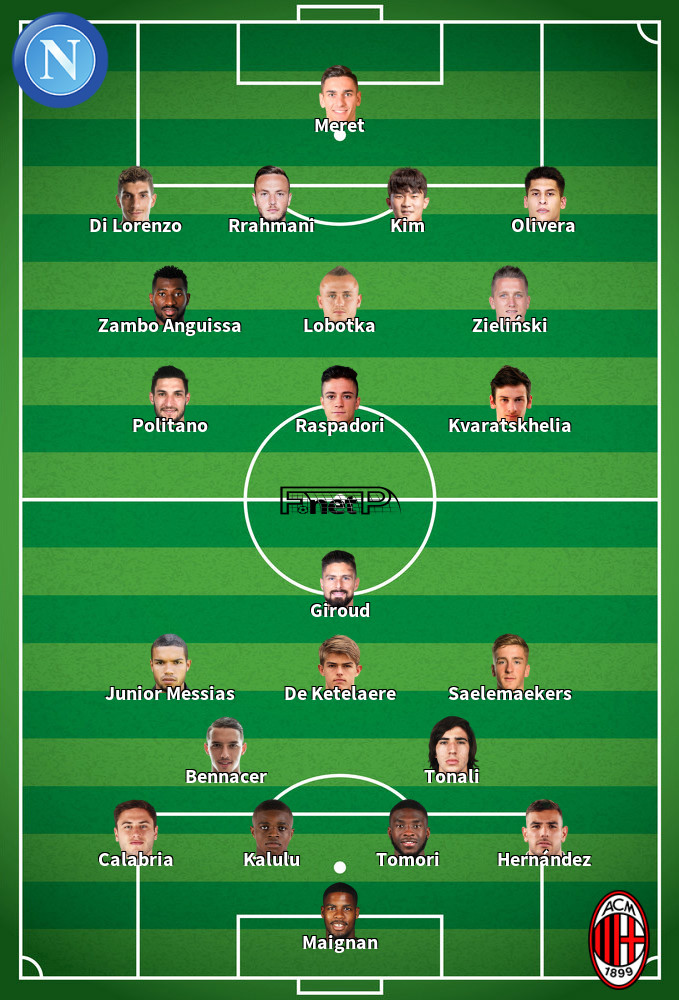 Normally used in the Left Wing position, Rafael Leão was born in Portugal. After having played his first senior match for Sporting Lisbon in the 2017 - 2018 season, the talented Forward has contributed 3 league goals in this Serie A 2022 - 2023 campaign to date in 6 appearances.

While we have made these predictions for AC Milan v SSC Napoli for this match preview with the best of intentions, no profits are guaranteed. Always gamble responsibly, and with what you can afford to lose. Good luck!