AEK Athens will be facing visitors PAS Giannina at Olympic Stadium of Athens in this Super League match on Wednesday.

View all AEK Athens v PAS Giannina tips, stats and our pre-match poll below - plus the latest betting odds.

AEK Athens go into this game coming off the back of a 0-0 Super League draw against Panathinaikos.

It has been a rare occasion in recent times where AEK Athens have kept a clean sheet. The facts show that AEK Athens have seen their defence breached in 5 of their previous 6 matches, leaking 7 goals on the way. We will have to see whether or not that trend will end up being continued on here.

Looking at their past form shows that AEK Athens:

PAS Giannina come into this match following a 1-0 Super League win vs PAOK in their most recent fixture.

In that match, PAS Giannina had 48% possession and 6 shots at goal with 2 of them on target. The only player on the scoresheet for PAS Giannina was Jan-Marc Schneider (77'). On the other side, PAOK had 10 shots on goal with 1 on target.

During their 6 most recent matches, Iraxlis Metaxas's PAS Giannina have seen their efforts on goal rewarded a total of 6 times thus earning them a goals per game average of 1.

Coming into this clash, PAS Giannina are without an away win for the past 5 league matches.

A glance at their prior head-to-head clashes going back to 14/01/2019 shows that AEK Athens have won 5 of these games & PAS Giannina 1, with the number of drawn results standing at 0.

An aggregate of 17 goals were scored between the two sides in this period, with 12 from AEK and 5 being from Ajax of Epirus. That is an average goals per game value of 2.83.

The last league game featuring the two was Super League match day 5 on 18/04/2022 when the final score was PAS Giannina 2-3 AEK Athens.

The match was refereed by Evangelos Manouhos.

There is just the sole fitness concern for the AEK Athens manager Sokraits Ofrydopoulos to be concerned with due to a largely intact group. Sergio Araujo (Tear in the abductor muscle) will miss out.

Due to a mostly healthy group, there’s just a single fitness worry for the PAS Giannina manager Iraxlis Metaxas to be concerned with. Pedro Conde (Tear in the abductor muscle) misses out for this game.

In this match, AEK Athens will likely score at least once when they face PAS Giannina, who could well struggle to find the back of the net.

We reckon that it will be a fairly comfortable 2-0 win for AEK Athens at the conclusion of the game. 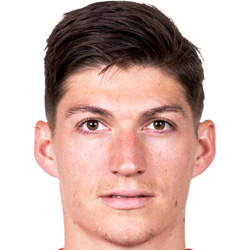 Normally used in the Left Attacking Midfielder position, Steven Zuber was born in Winterthur, Switzerland. Having played his first senior match for Grasshopper Club Zürich in the 2008 - 2009 season, the dangerous Midfielder has got 7 league goals in this Super League 2021 - 2022 season to date coming from a total of 31 appearances.

We have made these AEK Athens v PAS Giannina predictions for this match preview with the best intentions, but no profits are guaranteed. Please always gamble responsibly, only with money that you can afford to lose. We wish you the best of luck.