The Superettan tie at Örjans Vall on Saturday sees home side Halmstads BK go up against AFC Eskilstuna.

Full predictions, pre-match stats and user poll for Halmstads BK v AFC Eskilstuna are shown on this page - as well as up-to-date odds.

Halmstads BK, buoyed by their previous result, will be hoping for more of the same after the 1-3 Superettan triumph over Skövde AIK.

Halmstads BK have been on a persistent run of goalscoring form, hitting the target in each and every one of their last 6 matches.

They have managed to rack up 11 during that period and have conceded a total of 5. Let’s find out whether or not that trend will be sustained in this game.

Heading into this fixture, Halmstads BK have not been beaten in the league by AFC Eskilstuna in their last 2 matches.

AFC Eskilstuna will go into the meeting following a 5-2 Superettan win in the defeat of Västerås SK in their most recent match.

A very clinical AFC Eskilstuna have enjoyed getting themselves a plethora of goals over their last 6 clashes (18 to be precise). That translates to the impressive average of 3 goals scored per game during this period.

An examination of their prior head-to-head clashes dating back to 28/10/2017 shows that Halmstads BK have won 3 of these & AFC Eskilstuna 2, with the tally of drawn games being 1.

In all, 17 goals were produced between them in these games, with 10 from HBK and 7 created by AFC Eskilstuna. That’s an average goals per game of 2.83.

The previous league contest featuring these sides was Superettan match day 17 on 12/09/2020 when it finished AFC Eskilstuna 0-3 Halmstads BK.

The referee was Johan Krantz.

The Halmstads BK boss Magnus Haglund doesn’t have any fitness concerns whatsoever ahead of this clash owing to a fully healthy squad to pick from.

Due to a fully injury-free group available to choose from, the AFC Eskilstuna manager Jawad Al Jebouri has zero fitness concerns whatsoever ahead of this match.

We’re thinking that AFC Eskilstuna have the ability to get a goal against this Halmstads BK team, although it is unlikely to be as many as they will have scored against them.

Our tip is for both teams to score in a 2-1 winning margin for Halmstads BK at full-time. Looking forward to this. 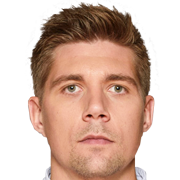 Customarily taking to the field in the Striker position, Mikael Boman was born in Kungsbacka, Sweden. After making a first senior appearance for Falkenbergs FF in the 2009 season, the dangerous Forward has contributed 2 league goals in this Superettan 2022 season to date from a total of 5 appearances.

While we have made these predictions for Halmstads BK v AFC Eskilstuna for this match preview with the best of intentions, no profits are guaranteed. Always gamble responsibly, and with what you can afford to lose. Good luck with your selections.