Full predictions, pre-match stats and user poll for AGF Aarhus v FC Midtjylland are shown on this page - as well as up-to-date odds.

AGF Aarhus prepare for this fixture following on from a 3-3 DBU Pokalen drawn result versus Kolding IF.

It’s not been often in recent games where AGF Aarhus haven’t conceded. In fact, De Hviie have been scored against in 5 of their previous 6 clashes, leaking 7 goals in the process.

FC Midtjylland go into this game after a 0-1 DBU Pokalen win with the downing of HB Køge in their previous game.

Indicating their appetite for productive matches, the back of the net has been hit 20 times in the last 6 matches in which FC Midtjylland have sent out their troops, giving a mean average of 3.33 goals for each meeting. Their opponents have managed 10 of those goals. We will find out if that trend will end up being sustained into this next match.

Heading into this contest, FC Midtjylland remain unbeaten by AGF Aarhus when having played them away from home in the previous 4 league games. A solid away record against them.

Looking at their past head to head clashes going back to 14/07/2018 shows us that AGF Aarhus have won 3 of these and FC Midtjylland 2, with the tally of drawn matches standing at 1.

In all, 18 goals were produced between them in this period, with 11 for De Hviie and 7 for Ulvene. That’s an average goals per game figure of 3.

The previous league contest between the two was Superliga Play-Offs match day 7 on 12/07/2020 which finished with the scoreline of AGF Aarhus 3-0 FC Midtjylland.

AGF Aarhus manager David Nielsen has a full complement, with no fitness concerns to speak of coming into this clash with a fully healthy squad to pick from.

We’re thinking that AGF Aarhus will need to put in a solid display to hit the back of the net against this FC Midtjylland team who will likely score one, at least.

That’s why our selection here is for a very even contest with a 0-1 winning score for FC Midtjylland when the full-time whistle blows. 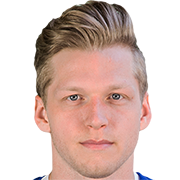 Mostly taking to the field in the Central Attacking Midfielder position, Bror Blume was born in Denmark. Having made his senior debut playing for Lyngby BK in the 2011 - 2012 season, the dangerous Midfielder has struck 2 league goals in the Superliga 2020 - 2021 campaign to date in 7 appearances.

While we have made these predictions for AGF Aarhus v FC Midtjylland for this match preview with the best of intentions, no profits are guaranteed. Always gamble responsibly, and with what you can afford to lose. Best of luck with your selections.