Alanyaspor will be hoping to bounce back here following the 3-0 Super Lig defeat in their last game at the hands of Beşiktaş.

In that match, Alanyaspor had 52% possession and 13 attempts on goal with 5 on target. At the other end, Beşiktaş got 17 shots at goal with 7 of them on target. Cenk Tosun (11'), Rachid Ghezzal (58') and Georges-Kévin Nkoudou (84') scored for Beşiktaş.

It’s been a rare occasion in recent games that Alanyaspor have shown defensive steel. In fact, Alanyaspor have been scored against in 5 of their previous 6 clashes, letting in 8 goals in the process.

Last time out, Denizlispor drew 1-1 in the Super Lig match with Kasimpasa.

In that match, Denizlispor had 51% possession and 15 attempts on goal with 6 on target. The scorer for Denizlispor was Hugo Rodallega (88'). On the other side, Kasimpasa had 13 attempts at goal with 3 on target. Kevin Varga (49') scored for Kasimpasa.

The attacking players from Denizlispor have had real problems scoring goals in their past 6 encounters, contributing the disappointing return of just 4. In those matches, Horozlar have also seen the overall goal aggregate of opposing teams equal 9. We will have to find out if that trend will be continued on here.

Heading into this fixture, Denizlispor are without an away win for the past 8 matches in the league. It's not a good run at all.

The last league match between the two was Super Lig match day 13 on 20/12/2020 when it ended Denizlispor 1-0 Alanyaspor.

The match was refereed by Suat Arslanboğa.

There’s just a single fitness concern for the Alanyaspor gaffer Çağdaş Atan to be concerned with from an otherwise complete group of players. Efecan Karaca (Unknown Injury) is sidelined.

Denizlispor manager Hakan Kutlu has not got a full squad to pick from. Ayman Ben Mohamed (Unknown Injury), Hüseyin Altintas (Unknown Injury), Özgür Cek (Fitness) and Ahmed Yasin (Cruciate Ligament Rupture) will miss out on this game. The players who will not be able to play in this game through being suspended are Hugo Rodallega and Asim Aksungur.

It looks to us that Alanyaspor will likely score more than once when they come up against Denizlispor, who could well find it tough scoring a goal of their own.

We’re therefore expecting to see a fairly comfortable 2-0 victory for Alanyaspor at the end of this one. 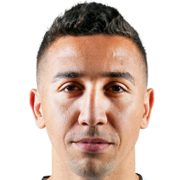 Generally used in the Left Wing position, Davidson was born in Rio de Janeiro, Brazil. After having played his first senior match for Chaves in the 2016 - 2017 season, the gifted Forward has accumulated 10 league goals in the Süper Lig 2020 - 2021 season to date in a total of 31 appearances.

We have made these Alanyaspor v Denizlispor predictions for this match preview with the best intentions, but no profits are guaranteed. Please always gamble responsibly, only with money that you can afford to lose.