Apollon Smyrni will be wanting a better result here following a 0-3 Super League defeat last time out to OFI Crete.

Apollon Smyrni have really been misfiring of late. Their ‘goals for’ figure equals just 3 vs opponents over the course of their previous 6 matches. In those games, Apollon Smyrni have also seen the number of goals that have gone against them total 10. We will just have to see if that trend will be sustained in this game.

A look at their previous results shows us that Apollon Smyrni:

Since suffering a loss in their previous game against Panathinaikos in Super League action, Aris FC and their travelling supporters will be hoping that they can get a better result in this one.

Checking on their most recent head to head clashes stretching back to 06/01/2014 shows that Apollon Smyrni have won 1 of these games & Aris FC 4, with the tally of drawn games being 1.

12 goals were produced between them during those clashes, with 3 for Light Bridgade and 9 for Theos tou polemou. That’s an average goals per game figure of 2.

The previous league game between the two was Super League match day 5 on 02/10/2021 when it ended Aris FC 0-0 Apollon Smyrni.

In that game, Aris FC managed 60% possession and 9 attempts at goal with 3 on target.

Apollon Smyrni had 2 attempts at goal with 2 on target.

The Apollon Smyrni manager Marco Grote has zero fitness concerns at all before this game thanks to a fully healthy squad ready to go.

Due to a fully healthy group ready to go, the Aris FC manager Apostolos Mantzios doesn’t have any fitness concerns to speak of ahead of this match.

We’re envisaging that Apollon Smyrni may well find it hard to break down this Aris FC lineup who we think will likely gain the upper hand.

With that in mind, we reckon that it will be a good tussle with a 0-1 advantage for Aris FC at the end of the 90. 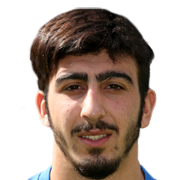 Customarily played in the Striker position, Nikos Ioannidis was born in Greece. After having played his first senior match for Hansa Rostock in the 2013 - 2014 season, the gifted Forward has bagged 3 league goals in the Super League 2021 - 2022 campaign to date from a total of 13 appearances.

While we have made these predictions for Apollon Smyrni v Aris FC for this match preview with the best of intentions, no profits are guaranteed. Always gamble responsibly, and with what you can afford to lose. Good luck if you do place a bet today.