Our predictions, user poll and statistics for Lokomotiv Plovdiv v Arda Kardzhali can be found here - plus the latest match odds.

Arda Kardzhali head into the game following a 3-2 First League win as they beat Septemvri Sofia in their most recent fixture.

In that match, Arda Kardzhali had 42% possession and 11 shots on goal with 4 of them on target. For Arda Kardzhali, goals were scored by Lachezar Kotev (6'), Hristo Ivanov (37'), Milan Stoev (74' Own goal) and El Mami Tetah (76'). For their opponents, Septemvri Sofia got 9 attempts at goal with 4 on target. Redi Kasa (28') scored for Septemvri Sofia.

In the course of their six previous matches, Aleksandar Tunchev's Arda Kardzhali have turned their attacks into goals a total of 8 times - yielding them a goals scored per game average of 1.33.

Checking out their prior head to head meetings dating back to 20/03/2021, there is nothing to separate the two clubs with Lokomotiv Plovdiv winning 1 of those games, Arda Kardzhali 1 and 4 being draws in regulation time.

Nearly everyone is up for selection, with just one fitness concern for the Lokomotiv Plovdiv gaffer Aleksandar Tomash to contend with thanks to an otherwise robust set of players. Vincent Marcel (Hamstring Injury) will miss out.

Due to a fully injury-free squad ready to go, the Arda Kardzhali manager Aleksandar Tunchev has zero fitness worries at all coming into this clash.

In this game, Arda Kardzhali have the capability to find the back of the net against this Lokomotiv Plovdiv side, however that is unlikely to be as many as they’ll concede.

We think that it’s going to be a close game with a 2-1 advantage for Lokomotiv Plovdiv when the full-time whistle blows. Looking forward to seeing how this one unfolds. 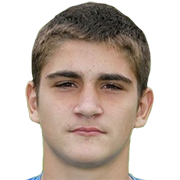 Usually played in the Striker position, Preslav Borukov was born in Sofia, Bulgaria. After having played his first senior match for Etar Veliko Tarnovo in the 2020 - 2021 season, the goalscoring Forward has accumulated 2 league goals in the First League 2022 - 2023 campaign so far in a total of 4 appearances.

We have made these Lokomotiv Plovdiv v Arda Kardzhali predictions for this match preview with the best intentions, but no profits are guaranteed. Please always gamble responsibly, only with money that you can afford to lose. Good luck!