Arminia Bielefeld are going up against visiting side Bayern Munich at SchücoArena in this Bundesliga 1 tie on Saturday.

For all of our match predictions, pre-game poll and statistics for Arminia Bielefeld v Bayern Munich, scroll down including the latest game odds.

Arminia Bielefeld will be looking for an improved result here following a 1-0 Bundesliga 1 defeat in their last game at the hands of Werder Bremen.

In their last six fixtures, Uwe Neuhaus's Arminia Bielefeld have hit the target a combined total of 8 times, with that being an average number of goals per match of 1.33.

Taking a look at their past results, Arminia Bielefeld:

Bayern Munich will come into the clash following a 0-3 DFB-Pokal win in the defeat of Düren in their last match.

Illustrating their bias toward fruitful matches, goals have been celebrated 27 times in the prior 6 games in which Bayern Munich have taken to the pitch, making it an average of 4.5 goals per fixture. Opposing teams have managed 8 of those goals.

Coming into this contest, Bayern Munich have not lost to Arminia Bielefeld when they have played them away from home in the previous 2 league matches.

A glance at their prior head to head meetings stretching back to 16/09/2006 shows that Arminia Bielefeld have won 1 of these games & Bayern Munich 5, with the tally of drawn matches being 0.

12 goals were shared by the two clubs in this period, with 3 of them from Bielefeld and 9 belonging to Bayern. The average goals per game has been 2.

Due to a mostly available squad, there is only the lone fitness problem for the Bayern Munich gaffer Hans-Dieter Flick to be concerned about. Tanguy Nianzou (Hamstring Injury) won’t be in action.

We’re thinking that Bayern Munich have the ability to see a lot of the ball and convert quite a few goal-scoring opportunities.

However, Arminia Bielefeld could well find it tough to find success in front of goal, although we do think that it’s probable they’ll be scoring here.

We’re predicting a decent 1-3 victory for Bayern Munich at the end of the 90 minutes. 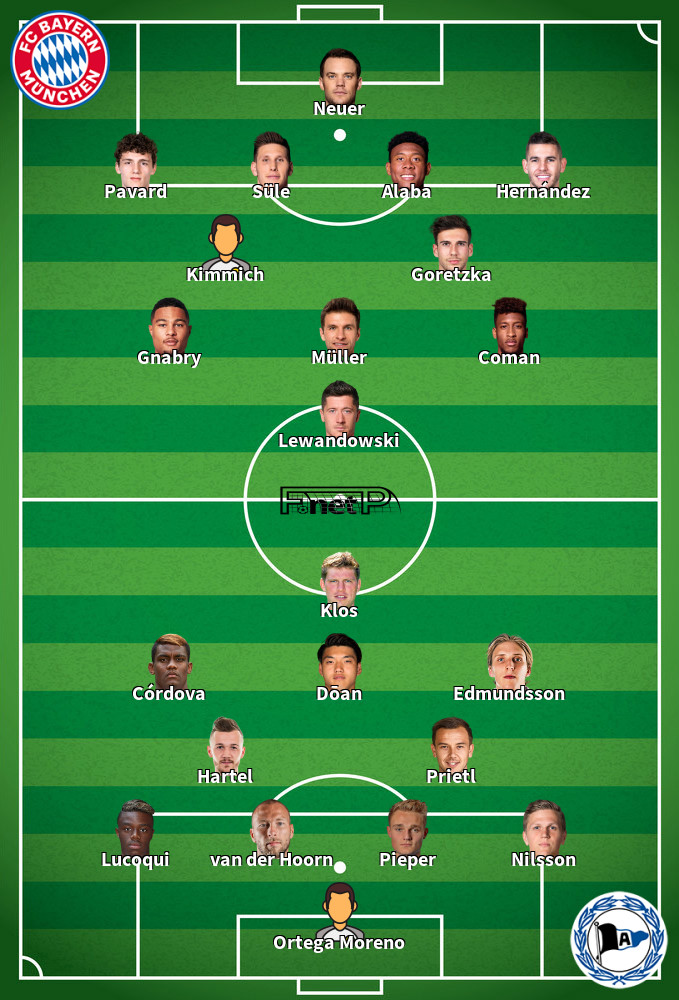 While we have made these predictions for Arminia Bielefeld v Bayern Munich for this match preview with the best of intentions, no profits are guaranteed. Always gamble responsibly, and with what you can afford to lose.