Scroll down to see all of the predictions, poll and statistics for Atlético Goianiense v Vasco da Gama (inc. the best betting odds).

Atlético Goianiense will be looking to improve on their last outing here following a 2-1 Serie A losing effort in their last game against Grêmio.

Marcelo Cabo's Atlético Goianiense have celebrated scoring a sum total of 6 times over their preceding 6 outings. The comparative number of goals that have been scored against them in those same fixtures stands at 5.

Since tasting defeat last time out to Atletico PR in Serie A action, Vasco da Gama and their travelling supporters will be hoping that they can get a better result in this one.

It is worth noting that Vasco da Gama have suffered from a shortage of goals over their previous 6 games, netting the disappointing return of just 4. In those matches, Vascão have also seen the overall goal aggregate against them equal 13.

Their prior results show that Vasco da Gama:

Looking at their prior head-to-head meetings going back to 22/09/2011 shows that Atlético Goianiense have won 1 of them and Vasco da Gama 4, with the number of drawn results being 1.

A combined sum of 9 goals were yielded between them during those clashes, with 3 from Dragão and 6 being from Vascão. That is an average goals per game value of 1.5.

The last league match between these sides was Serie A match day 9 on 11/09/2020 when it finished Vasco da Gama 1-2 Atlético Goianiense.

On that day, Vasco da Gama had 54% possession and 9 shots at goal with 5 of them on target. Their only player to score was Germán Cano (61').

For their opponents, Atlético Goianiense had 13 attempts at goal with 7 of them on target. Renato Kayzer (63', 74') was the scorer.

The match was refereed by Heber Roberto Lopes.

Atlético Goianiense manager Marcelo Cabo will be happy not to have any fitness worries at all ahead of this game with a completely injury-free group available to choose from.

With a completely injury-free squad available to choose from, Vasco da Gama boss Ricardo Sá Pinto has no fitness concerns at all before this game.

We feel that over the course of the game, Vasco da Gama might need a bit of good fortune to break down this Atlético Goianiense outfit who we reckon should get the vital goal that wins it.

We’re therefore tipping a good tussle with a 1-0 victory for Atlético Goianiense at the end of the 90 minutes. 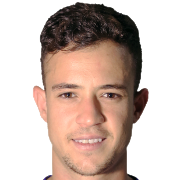 Regularly used in the Right Wing position, Gustavo Ferrareis was born in Bauru-SP, Brazil. Having made his senior debut playing for Internacional in the 2014 season, the talented Forward has managed to score 3 league goals in this Série A 2020 season to date in 24 appearances.

While we have made these predictions for Atlético Goianiense v Vasco da Gama for this match preview with the best of intentions, no profits are guaranteed. Always gamble responsibly, and with what you can afford to lose. Best of luck with your selections.