Atlético Madrid face off with away team Real Valladolid at Cívitas Metropolitano in this La Liga meeting on Saturday.

Our predictions, user poll and statistics for Atlético Madrid v Real Valladolid can be found here (including the best match odds).

Atlético Madrid, buoyed by their previous result, will be hoping for more of the same after the 0-2 Copa del Rey success against Levante.

In that match, Atlético Madrid managed 51% possession and 7 shots at goal with 4 on target. For Atlético Madrid, the goals were scored by Álvaro Morata (54') and Marcos Llorente (91'). Levante UD had 9 attempts on goal with 2 on target.

Their most recent results highlight the fact that there has been much resilience in the Atlético Madrid backline. Atlético Madrid have kept it tight, resulting in the tally of goals that have gone in at their end over the course of their last six clashes standing at 3.

Heading into this contest, Atlético Madrid haven't lost in the league to Real Valladolid in their last 12 matches. A long run without a loss.

Following on from tasting defeat last time out to Rayo Vallecano in La Liga action, Real Valladolid will be hoping to turn things around here.

Over the course of 5 of the previous 6 games featuring Real Valladolid, a comparatively low number of goals have gone in between them and their opponents. The overall average goals scored per game within that spell comes out as a meagre 2.17, with the average goals for Pucela equalling 1.17. Such a pattern might not be sustained here, of course.

An inspection of their past head to head results stretching back to 15/12/2018 reveals that these fixtures have not been kind to Real Valladolid. They’ve not been able to come away with any wins at all while Atlético Madrid have dominated them, running out winners in 83 per cent of those games where they have faced each other.

A total of 12 goals were shared by the two clubs during those clashes, with 9 of them for Atleti and 3 belonging to Pucela. That’s an average goals per game figure of 2.

The previous league meeting featuring these clubs was La Liga match day 38 on 22/05/2021 when the final score was Real Valladolid 1-2 Atlético Madrid.

On that occasion, Real Valladolid had 48% possession and 10 attempts at goal with 4 of them on target. The scorer was Óscar Plano (18').

The Atlético Madrid manager Diego Simeone has zero fitness concerns to speak of before this game thanks to a fully injury-free squad available for selection.

In an otherwise full-strength squad, there’s only the sole fitness issue for the Real Valladolid gaffer José Pacheta to be concerned about. Anuar (Cruciate Ligament Injury) won’t be playing here.

We feel that in this game, Atlético Madrid can and should have the majority of the possession and should be able to turn a few of their chances into goals.

Conversely, Real Valladolid may well find it hard getting goals although we do think it’s probable that they will be managing to get on the scoresheet, too.

We reckon that it will be a decent 3-1 margin for Atlético Madrid at the end of the match. 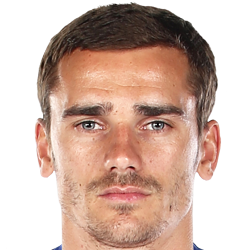 Regularly playing in the Striker position, Antoine Griezmann was born in Mâcon, France. Having made a first senior appearance for Real Sociedad in the 2009 - 2010 season, the goalscoring Forward has managed 5 league goals in this LaLiga 2022 - 2023 season so far in 17 appearances.

We have made these Atlético Madrid v Real Valladolid predictions for this match preview with the best intentions, but no profits are guaranteed. Please always gamble responsibly, only with money that you can afford to lose. Best of luck with your selections.