Scroll down to see all of the predictions, poll and statistics for Blackburn Rovers v Coventry City (inc. the best betting odds).

Blackburn Rovers will be looking to improve on their last outing here following a 2-1 Championship defeat last time out to Blackpool.

Fixtures with Blackburn Rovers have usually been lively affairs of late with high scoring being the norm. Over their past 6 clashes alone, a grand total of 20 goals have flown in for both teams combined (at an average of 3.33 goals per game) with 12 of those belonging to Blackburn Rovers. That kind of pattern won’t necessarily be carried forward here, though.

A look at their previous results shows us that Blackburn Rovers:

Coventry City go into this clash following a 4-1 Championship win to beat Fulham in their previous fixture.

During their 6 most recent matches, Mark Robins's Coventry City have turned their attacks into goals 11 times - giving them a goals per game average of 1.83.

Leading up to this clash, Coventry City:

Looking at the statistics for their head to head meetings stretching back to 05/01/2008, there is nothing to separate the two clubs with Blackburn Rovers winning 2 of those games, Coventry City 2 and 2 being drawn in regulation time.

In all, 20 goals were shared by the two clubs during those clashes, with 11 for Rovers and 9 for The Sky Blues. That’s an average goals per game of 3.33.

The last league encounter between these clubs was Championship match day 33 on 27/02/2021 and the score finished Blackburn Rovers 1-1 Coventry City.

That day, Blackburn Rovers had 66% possession and 6 attempts at goal with 2 on target. The scorer was Ben Brereton (27').

Coventry City got 10 attempts at goal with 3 of them on target. Matty James (50') scored.

Almost everyone can be considered, as there’s just the sole fitness concern for the Blackburn Rovers gaffer Tony Mowbray to be concerned with from an otherwise fully-primed squad. Bradley Dack (Cruciate Ligament Injury) is sidelined.

In an otherwise full-strength squad, there is just the sole fitness worry for the Coventry City gaffer Mark Robins to contend with. Tyler Walker (Hip Injury) won’t be playing here. Ian Maatsen cannot play in this game through suspension.

In our opinion, Coventry City and Blackburn Rovers may well end up cancelling each other out here.

We’ll see, but this looks like it could end up all-square. We therefore think that it’s going to be a very even match with a 1-1 draw at the conclusion of the game. 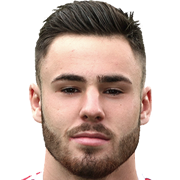 Usually played in the Striker position, Ben Brereton was born in Blythe Bridge, England. Having played his first senior match for Nottingham Forest in the 2016 - 2017 season, the accomplished Forward has accumulated 10 league goals in the Championship 2021 - 2022 campaign to date coming from a total of 11 appearances.

While we have made these predictions for Blackburn Rovers v Coventry City for this match preview with the best of intentions, no profits are guaranteed. Always gamble responsibly, and with what you can afford to lose.