All Brescia v Sampdoria match predictions, user poll and stats are shown below - plus the latest match odds.

Brescia will be looking for an improved result here after a 2-0 Serie A loss in their previous game against Lazio.

In that match, Brescia managed 40% possession and 13 shots at goal with 2 on target. On the other side, Lazio got 29 shots on goal with 13 of them on target. Joaquín Correa (17') and Ciro Immobile (82') scored for Lazio.

Matches with Brescia have usually been lively affairs of late with a lot of goalmouth action being a common characteristic. Over their past half dozen games alone, the sum total of 23 goals have been recorded for both teams combined (at an average of 3.83 goals per game) with 6 of them being chalked up by Rondinelle.

Going into this one, Brescia have left without a victory over Sampdoria in their last 4 league games.

Since a losing effort in their last game against AC Milan in Serie A competition, Sampdoria will be hoping to turn things around here.

In a total of 5 of the previous 6 clashes involving Sampdoria, a minimum of three goals have been hit. The overall average goals scored per match during that spell is 3.67, with the average number of goals for i Blucerchiati working out to 1.83. We will have to find out if that trend will end up being sustained into this next match.

Coming into this fixture, Sampdoria have not registered a win against Brescia when they have played them away from home in the previous 2 league games.

A glance at their prior head to head meetings stretching back to 12/12/2010 shows us that Brescia have won 1 of these games & Sampdoria 3, with the number of draws standing at 2.

A combined total of 17 goals were shared by the two clubs during those clashes, with 5 for Rondinelle and 12 for i Blucerchiati. That’s an average goals per game figure of 2.83.

The last league clash between these sides was Serie A match day 19 on 12/01/2020 which finished with the scoreline of Sampdoria 5-1 Brescia.

At the other end, Brescia had 11 attempts on goal with 4 on target. Jhon Chancellor (12') scored.

Sampdoria boss Claudio Ranieri has to choose a team with limited availability. Felice D'Amico (Foot Injury) and Albin Ekdal (Distortion of the ankle) will miss out on this game. Bartosz Bereszynski will not be able to play in this game through being suspended.

Our thinking is that Sampdoria are likely to be in control for long periods of time and should be able to convert a few of their chances.

However, Brescia might well find it a difficult task getting goals- but, we do see them converting at least once here.

We’re therefore anticipating a pretty comfortable 1-3 victory for Sampdoria at the end of this one.

Both Teams to Score Prediction for Brescia vs Sampdoria
Yes 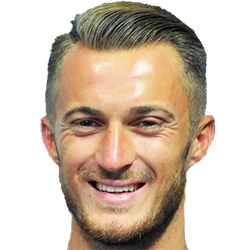 Customarily played in the Striker position, Alfredo Donnarumma was born in Torre Annunziata, Italy. Having made his senior debut playing for Cittadella in the 2013 - 2014 season, the skilful Forward has scored a sum of 7 league goals in this Serie A 2019 - 2020 campaign to date in 30 appearances.

We have made these Brescia v Sampdoria predictions for this match preview with the best intentions, but no profits are guaranteed. Please always gamble responsibly, only with money that you can afford to lose. Best of luck.