Burnley will be at Etihad Stadium on Saturday for the Premier League fixture with home side Manchester City.

Scroll down for all of our predictions, poll and stats for the Manchester City v Burnley game - plus the latest betting odds.

Manchester City go into this match after a 2-2 Premier League drawn game against Liverpool.

In that game, Manchester City managed 52% possession and 12 attempts on goal with 3 on target. For Manchester City, the goals were scored by Phil Foden (69') and Kevin De Bruyne (81'). On the other side, Liverpool had 6 attempts at goal with 4 on target. Sadio Mané (59') and Mohamed Salah (76') scored for Liverpool.

Matches involving Manchester City have proved to be engaging encounters lately with plenty of scoring being the norm. Over their past half dozen clashes alone, a total of 23 goals have been recorded for both teams combined (at an average of 3.83 goals per game) with 15 of them coming from Manchester City. That kind of trend isn’t assured to be continued into this game, of course.

Last time out, Burnley drew 0-0 in the Premier League match with Norwich City.

In that game, Burnley had 56% possession and 14 attempts on goal with 4 of them on target. For their opponents, Norwich City got 11 shots at goal with 2 on target.

The stats don’t lie, and Burnley have been scored against in 5 of their last 6 matches, with opponents netting 8 goals in all. In defence, Burnley have clearly had some problems.

Ahead of this clash, Burnley have not won away from home in their last 4 league games.

Checking on their past head to head results stretching back to 28/04/2019 shows that these encounters have been disappointments for Burnley. They’ve not managed to register any victories whatsoever while Manchester City have been too good for them, finishing as winners in 100 per cent of those matches played.

A total of 21 goals were shared by the two clubs in this period, with 20 of them for The Citizens and 1 created by The Clarets. The average goals per game has been 3.5.

The last league game featuring the two was Premier League match day 22 on 03/02/2021 and the score finished Burnley 0-2 Manchester City.

That day, Burnley had 25% possession and 2 shots at goal with 0 of them on target.

Manchester City got 13 shots at goal with 6 on target. Gabriel Jesus (3') and Raheem Sterling (38') scored.

Thanks to a mainly healthy group, there’s only a single fitness issue for the Burnley gaffer Sean Dyche to be concerned about. Jóhann Berg Gudmundsson (Unknown Injury) misses out for this game.

We believe that Manchester City are likely to see a lot of the ball and convert quite a few goal-scoring opportunities.

However, Burnley may well struggle to break down their defence but we can see them scoring here. 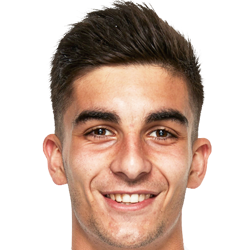 Mostly used in the Right Wing position, Ferrán Torres was born in Foios, Spain. After having played his first senior match for Valencia in the 2017 - 2018 season, the accomplished Forward has contributed 2 league goals in the Premier League 2021 - 2022 season to date in 4 appearances.

While we have made these predictions for Manchester City v Burnley for this match preview with the best of intentions, no profits are guaranteed. Always gamble responsibly, and with what you can afford to lose. Best of luck with your selections.