Carrick Rangers will be taking on guests Larne at Loughview Leisure Arena in the Premiership meeting on Friday.

Our Carrick Rangers v Larne predictions, statistics and match poll can be seen below (plus the best game odds).

Carrick Rangers will be looking for a repeat result of the 0-1 Premiership triumph vs Ballymena United.

The only name on the scoresheet from Carrick Rangers was David Cushley (52').

Larne will go into this clash after a 0-1 Premiership win as they beat Portadown in their previous fixture.

The only player to score from Larne was Paul O'Neill (28').

A sequence of effective performances from the Larne defence has seen their ‘goals against’ tally amounting to 3 from their previous 6 clashes overall. In that period, their forwards have scored 7. We will have to find out whether or not that trend can be continued on here.

A quick look at their past head to head meetings stretching back to 24/10/2020 shows that these encounters have been pretty painful for Carrick Rangers. They’ve not been able to register any victories whatsoever whereas Larne have been dominant against them, beating them in 67% of those ties.

16 goals were produced between them during those clashes, with 4 of them from The Gers and 12 belonging to Larne. That’s an average goals per game of 2.67.

The previous league encounter between these clubs was Premiership match day 32 on 18/03/2022 which ended up with the score at Carrick Rangers 1-1 Larne.

The match was refereed by Raymond Crangle.

The Carrick Rangers manager Stuart King has zero fitness concerns to speak of coming into this game thanks to a fully injury-free group to pick from.

Owing to a completely healthy group available for selection, the Larne boss Tiernan Lynch does not have any fitness worries whatsoever coming into this match.

We feel that Carrick Rangers are dangerous enough to find the net against this Larne side, although one goal probably won’t quite be good enough.

Therefore, we think that it’s going to be a very close game with a 1-2 winning margin for Larne after the 90. Looking forward to this. 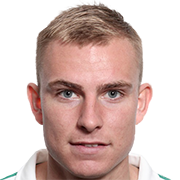 Mostly played in the Centre Midfield position, Andy Mitchell was born in Glengormley, N. Ireland. Having played his first senior match for Rangers in the 2011 - 2012 season, the talented Midfielder has netted 2 league goals in this Premiership 2022 - 2023 season to date from a total of 5 appearances.

While we have made these predictions for Carrick Rangers v Larne for this match preview with the best of intentions, no profits are guaranteed. Always gamble responsibly, and with what you can afford to lose. Good luck if you do place a bet today.