Chapecoense visit Estádio José Pinheiro Borda on Sunday for the Serie A tie with hosts Internacional.

All Internacional v Chapecoense game predictions, stats and user poll are shown below - along with the latest match odds.

Internacional prepare for this fixture after a 0-0 Serie A drawn game versus Ceará.

Their most recent results shine a light on the fact that it has been a great time for the Internacional rearguard. Internacional have been mean at the back, seeing the number of goals that have gone past their goalkeeper during their past 6 outings standing at 1. We will find out whether or not that trend can be continued on here.

In their last game, Chapecoense drew 2-2 in the Serie A tie with Atlético Mineiro.

Looking at their form, and Chapecoense have been scored against in 6 of their last 6 games, letting opponents get 9 goals in all. Defensively, Chapecoense seem to have a bit of a soft underbelly.

Looking at the statistics for their head to head duels dating back to 15/08/2016, both clubs have shared the honours with Internacional winning 3 of those games, Chapecoense 3 and 0 being drawn in normal time.

A combined sum of 13 goals were scored between the two sides throughout the course of those matches, with 7 for Colorado and 6 for Verdão. The average goals per game has been 2.17.

The last league clash featuring these clubs was Serie A match day 6 on 24/06/2021 when the final score was Chapecoense 1-2 Internacional.

In that match, Chapecoense managed 52% possession and 11 shots on goal with 5 on target. The scorer was Derlan (55').

The referee was Alexandre Vargas Tavares.

It doesn’t get much better regarding selection, with just the sole fitness concern for the Internacional manager Diego Aguirre to be concerned about from a near full-strength group of players. Rodrigo Moledo (Cruciate Ligament Rupture) is sidelined.

Looking at these two teams, we feel that Internacional will more than likely get the win and a possible clean sheet against Chapecoense, who could well struggle to score themselves.

We can therefore see a comfortable 2-0 margin for Internacional at the conclusion of the game. 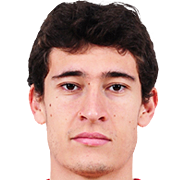 Typically played in the Central Defensive Midfielder position, Rodrigo Dourado was born in Pelotas, Brazil. Having made his senior debut playing for Internacional in the 2012 season, the accomplished Midfielder has struck 2 league goals in this Série A 2021 season so far in a total of 17 appearances.

While we have made these predictions for Internacional v Chapecoense for this match preview with the best of intentions, no profits are guaranteed. Always gamble responsibly, and with what you can afford to lose. Good luck if you do place a bet today.