This Venezia v Chievo Verona live stream video is ready for broadcast on 13/05/2021. Fans of both clubs can watch this fixture on a live streaming service if this match is featured in the schedule mentioned above. Here we provide useful info for watching this Serie B - Play-offs game that includes the most recent team form, head to head clashes and our match tips.

To watch the game using alternative ways, check tv listings in your locality. These broadcasting deals are often distributed on a per-competition/league or even individual game basis. For games shown live on regional tv programmes, check the listings on stations like BT Sport, Amazon Prime Video, Sky Sports, Now TV, iTV, Canal+, Fox Soccer, ESPN that are relevant for where you are.

When the abovementioned broadcaster has the rights to the Venezia v Chievo Verona football live streaming service, you’ll be able to view the game on a mobile (iPhone, Android including OnePlus) and computer as well as tablet (eg iPad, Lenovo Tab).

Post-game, we might also provide a link to match highlights from time to time. We are not responsible for the transmission of any game video content linked to from here. All legal complaints must be directed to the hosters/owners of this content.

Chievo Verona will be playing on Thursday as time edges closer to this impending Serie B - Play-offs meeting against Venezia.

All of our predictions, stats and the user poll for Venezia v Chievo Verona are shown below - as well as up-to-date odds.

Venezia head into this fixture following on from a 1-1 Serie B drawn game vs Cittadella.

In that game, Venezia had 51% possession and 15 attempts at goal with 8 on target. The only player on the scoresheet for Venezia was Riccardo Bocalon (33'). For their opponents, Cittadella had 11 attempts on goal with 4 of them on target. Enrico Baldini (50') scored for Cittadella.

Over their preceding 6 fixtures, Paolo Zanetti's Venezia have hit the back of the net a combined total of 10 times giving them an average number of goals per match equal to 1.67.

Chievo Verona will come into the clash following a 3-0 Serie B win with the defeat of Ascoli in their previous outing.

In that match, Chievo Verona managed 39% possession and 9 shots at goal with 7 on target. For Chievo Verona, the goals were scored by Luigi Canotto (19', 57') and Luca Garritano (80'). Ascoli had 11 attempts on goal with 2 on target.

Looking at their form, and Chievo Verona have been scored against in 5 of their last 6 games, conceding 8 goals in all. Defensively, Mussi Volanti just haven’t been too solid at all. We will just have to find out whether or not that trend will be continued on in this game.

Owing to a fully healthy group to choose from, Chievo Verona boss Alfredo Aglietti has no fitness concerns at all coming into this clash.

We’re of the opinion that Chievo Verona will have to play well to put one past this Venezia side who we reckon will score one, at least.

We’re therefore anticipating a very even contest with a 1-0 advantage for Venezia at the end of the match. 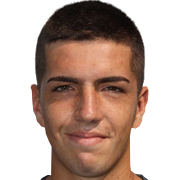 Customarily played in the Striker position, Francesco Forte was born in Rome, Italy. After making a first senior appearance for Inter Milan in the 2012 - 2013 season, the gifted Forward has managed 14 league goals in the Serie B 2020 - 2021 campaign to date in a total of 33 appearances.

We have made these Venezia v Chievo Verona predictions for this match preview with the best intentions, but no profits are guaranteed. Please always gamble responsibly, only with money that you can afford to lose. Good luck if you do place a bet today.

⚽️ Where can I get the odds for other Serie B - Play-offs matches?

View all of the upcoming (and previous) Serie B - Play-offs predictions & previews here.