Cliftonville will take to the pitch with visiting team Coleraine at Solitude in the Premiership tie on Saturday.

Our Cliftonville v Coleraine tips, poll and stats can be seen in full below - as well as the best betting odds.

Cliftonville enter this match after a 3-3 Premiership drawn match versus Carrick Rangers.

Over their preceding 6 games, Paddy McLaughlin's Cliftonville have seen rewards for their attempts on goal 12 times which gives them an average number of goals scored per match equal to 2.

Ahead of this meeting, Cliftonville are unbeaten in their last 17 home league matches. An amazing run.

Coleraine come into this match following on from a 4-1 Premiership win versus Portadown in their most recent match.

A series of dependable performances from the Coleraine defence has seen their ‘goals against’ tally standing at 3 from their last 6 clashes overall. During the same time, the number of goals that they have scored themselves is 13.

Their past results show that Coleraine:

Looking at their most recent head to head meetings stretching back to 27/11/2021 shows us that Cliftonville have won 4 of them and Coleraine 1, with the tally of draws being 1.

18 goals were yielded between them throughout the course of those matches, with 11 of them for The Reds and 7 belonging to The Bannsiders. The average number of goals per game works out to 3.

The previous league fixture between the two was Premiership match day 12 on 22/10/2022 which finished with the scoreline of Coleraine 2-4 Cliftonville.

The referee was Lee Tavinder.

The Cliftonville boss Paddy McLaughlin has no fitness worries to speak of coming into this game with a fully injury-free squad ready to go.

Thanks to a completely healthy squad to choose from, the Coleraine manager Oran Kearney doesn’t have any fitness concerns whatsoever coming into this game.

In this match, Coleraine will likely be able to get a goal against this Cliftonville side, however it probably won’t quite be as many as the goals that they could concede.

We are anticipating both teams to score in a 2-1 advantage for Cliftonville after 90 minutes. Definitely a tough call. 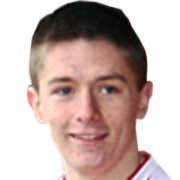 Normally played in the Striker position, Ryan Curran was born in N. Ireland. After having made a senior debut playing for Derry City in the 2012 season, the goalscoring Forward has scored 11 league goals in this Premiership 2022 - 2023 campaign to date from a total of 19 appearances.

We have made these Cliftonville v Coleraine predictions for this match preview with the best intentions, but no profits are guaranteed. Please always gamble responsibly, only with money that you can afford to lose. Good luck!