The Ekstraklasa match at Miejski Stadion Piłkarski on Sunday will see hosts Raków Częstochowa up against Cracovia.

View all of the Raków Częstochowa v Cracovia predictions, poll and stats below (including the best match odds).

Raków Częstochowa fans will want a repeat of their previous result, being the 2-1 Ekstraklasa triumph over Górnik Leczna.

Their latest results reveal that much solidity has been shown by the Raków Częstochowa defence. Raków Częstochowa have been mean at the back, resulting in the total number of goals that have gone past their goalkeeper over the course of their previous 6 games standing at 4.

Coming into this clash, Raków Częstochowa haven't been defeated in their previous 7 home league matches.

Last time out, Cracovia drew 0-0 in the Ekstraklasa match with Wisła Kraków.

In that match, Cracovia managed 52% possession and 17 shots on goal with 5 on target. Wisła Kraków got 9 attempts at goal with 3 of them on target.

For 5 of the previous 6 games involving Cracovia, a notably low volume of goals have gone in between them and opposing sides. The overall average goals scored per game in that period works out to a mere 1.17, with the number of goals averaged by Pasy equalling 0.67. Such a trend might not follow through into this next game, of course.

The previous league meeting between these clubs was Ekstraklasa match day 15 on 22/11/2021 which ended up with the score at Cracovia 1-0 Raków Częstochowa.

That day, Cracovia had 45% possession and 10 shots at goal with 4 of them on target. Their only player to score was Otar Kakabadze (69').

Raków Częstochowa had 17 shots on goal with 6 on target.

The Raków Częstochowa boss Marek Papszun has zero fitness concerns to speak of before this match thanks to a fully healthy group to pick from.

Thanks to a completely healthy squad to choose from, the Cracovia manager Jacek Zieliński does not have any fitness concerns whatsoever before this game.

For this match, we think that Raków Częstochowa have it within them to get amongst the goals when they play Cracovia, who won’t find it easy scoring a goal of their own.

Therefore, we are anticipating a fairly comfortable 2-0 margin for Raków Częstochowa at the end of this one. 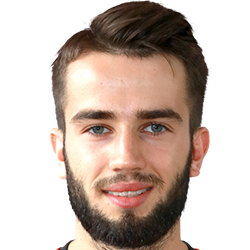 Generally taking to the field in the Right Attacking Midfielder position, Mateusz Wdowiak was born in Poland. After having made a senior debut playing for Cracovia in the 2014 - 2015 season, the gifted Midfielder has scored 7 league goals in this Ekstraklasa 2021 - 2022 campaign so far from a total of 30 appearances.

We have made these Raków Częstochowa v Cracovia predictions for this match preview with the best intentions, but no profits are guaranteed. Please always gamble responsibly, only with money that you can afford to lose. We wish you the best of luck.