Crystal Palace come up against the visiting Newcastle United at Selhurst Park in the Premier League clash on Saturday.

To see all of our predictions, user poll & stats for Crystal Palace v Newcastle United, scroll down - as well as up-to-date odds.

Crystal Palace head into this game following on from a 1-1 Premier League drawn result against Manchester United.

Crystal Palace haven’t made the most of their chances of late. Their ‘goals for’ figure equals just 4 against opposition teams during their last 6 outings. In those meetings, Crystal Palace have also seen the tally of goals scored against them total 11.

Coming into this contest, Crystal Palace have not beaten Newcastle United in their previous 3 matches in the league.

Newcastle United come into this encounter after a 1-0 Premier League win with the defeat of Fulham in their last match.

A series of outstanding displays from the Newcastle United defenders has resulted in their ‘goals against’ tally standing at 2 from their last 6 fixtures in total. Over that same time, the number of goals that they have scored themselves amounts to 7. That trend won’t necessarily follow through into this match, however.

Checking on their past head to head clashes dating back to 27/11/2020 shows that Crystal Palace have won 1 of these games & Newcastle United 2, with the tally of drawn games being 3.

In all, 8 goals were yielded between them in these games, with 3 of them from The Eagles and 5 netted by The Magpies. The average number of goals per game works out to 1.33.

Almost everyone can be considered, as there’s just one fitness concern for the Crystal Palace boss Patrick Vieira to be concerned with from an otherwise complete group. Nathan Ferguson (Achilles tendon problems) won’t play.

Here is a game where Crystal Palace will need things to go their way to break down this Newcastle United outfit who we think might be able to get on the scoresheet themselves in a winning performance.

We’re therefore expecting a very even match with a 0-1 winning margin for Newcastle United at the end of the 90 minutes. 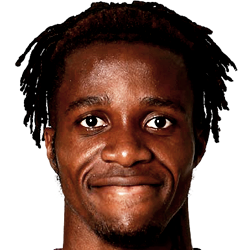 Mostly played in the Left Wing position, Wilfried Zaha was born in Abidjan, Ivory Coast. After having played his first senior match for Crystal Palace in the 2009 - 2010 season, the talented Forward has struck 6 league goals in the Premier League 2022 - 2023 season so far in 17 appearances.

While we have made these predictions for Crystal Palace v Newcastle United for this match preview with the best of intentions, no profits are guaranteed. Always gamble responsibly, and with what you can afford to lose.