Norrby IF vs Degerfors IF Prediction & Betting Tips

Degerfors IF make the trip to Borås Arena on Saturday for the Superettan meeting with home team Norrby IF.

All Norrby IF v Degerfors IF match predictions, user poll and stats are shown below - along with the latest match odds.

Norrby IF will be looking for an improved result here after the 0-1 Superettan losing effort in their last game against GIF Sundsvall.

Pontus Engblom (33') was the scorer for GIF Sundsvall.

Fewer than three goals per match were scored during 5 of the last 6 meetings where Norrby IF have taken part. With regard to the goal attribution from this period, opposition teams scored an aggregate of 6 while Norrby totted up 7. However, it remains to be seen if such a trend will continue on in this next match.

Coming into this fixture, Norrby IF have not been beaten in the league by Degerfors IF in their last 3 games.

Degerfors IF come into this meeting following on from a 0-6 Superettan win to beat Umeå FC in their last fixture.

Indicating their partiality to action-packed matches, we’ve seen goals 24 times in the last six matches in which Degerfors IF have sent out their troops, making it an average of 4 goals each meeting. Opposing teams have managed 7 of this grand total.

Heading into this fixture, Degerfors IF have not been beaten in their last 12 away league matches. They've been so good on the road.

A glance at their most recent head to head clashes dating back to 14/10/2017 shows that Norrby IF have won 3 of these games & Degerfors IF 2, with the tally of drawn games being 1.

An aggregate of 11 goals were shared by the two clubs throughout the course of those matches, with 6 from Norrby and 5 netted by Degerfors. This gives an average number of goals per game equal to 1.83.

The previous league fixture between these clubs was Superettan match day 3 on 28/06/2020 when the final score was Degerfors IF 0-1 Norrby IF.

Norrby IF boss Mak Lind will be happy not to have any fitness worries whatsoever ahead of this game with a fully healthy group available to choose from.

Thanks to a completely injury-free squad ready to go, Degerfors IF boss Tobias Solberg has no fitness worries whatsoever coming into this clash.

Our thinking is that Norrby IF have the firepower to put a goal past this Degerfors IF team, but a single goal may not quite be as many as they will have scored against them.

We’re therefore expecting both teams to score in a 1-2 advantage for Degerfors IF after the 90. 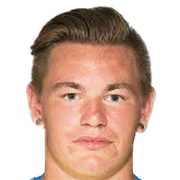 Normally deployed in the Central Attacking Midfielder position, Rasmus Örqvist was born in Sweden. Having played his first senior match for Norrby IF in the 2020 season, the goalscoring Midfielder has managed to score 3 league goals in the Superettan 2020 campaign so far from a total of 18 appearances.

While we have made these predictions for Norrby IF v Degerfors IF for this match preview with the best of intentions, no profits are guaranteed. Always gamble responsibly, and with what you can afford to lose. Best of luck.