Sligo Rovers will visit Head In The Game Park on Friday for the Premier Division showdown with home side Drogheda United.

Scroll down for all of our predictions, poll and stats for the Drogheda United v Sligo Rovers game (plus the best game odds).

Drogheda United enter this fixture after a 1-1 Premier Division draw versus Derry City.

The only name on the scoresheet from Drogheda United was Dean Williams (78'). Matty Smith (33') was the scorer for Derry City.

Ahead of this meeting, Drogheda United have not registered a win against Sligo Rovers in their previous 4 league games.

Sligo Rovers will come into the match after a 3-0 Premier Division win against Finn Harps in their last fixture.

The stats tell the story, and Sligo Rovers have been scored against in 5 of their last 6 matches, seeing opposing sides hit 8 goals in total. In defence, Sligo Rovers seem to have a bit of a soft underbelly. Previous results aside, we must now wait to see whether that pattern will continue on in this next match or not.

A look at their prior head to head clashes stretching back to 30/04/2021 tells us that Drogheda United have won 1 of these and Sligo Rovers 3, with the tally of drawn results being 2.

A combined total of 15 goals were shared by the two clubs during those clashes, with 5 for The Drogs and 10 for The Bit o' Red. This gives an average number of goals per game equal to 2.5.

The previous league meeting featuring these clubs was Premier Division match day 12 on 23/04/2022 when it ended Sligo Rovers 3-2 Drogheda United.

The match was refereed by Damien McGraith.

Looking at personnel, there is just the lone fitness concern for the Drogheda United boss Kevin Doherty to be concerned about due to a largely intact group. Darragh Markey (Metatarsal Fracture) is out of contention.

Thanks to a fully injury-free squad to choose from, the Sligo Rovers manager Liam Buckley does not have any fitness worries whatsoever ahead of this match.

We’ve got the feeling that Drogheda United will do well to register a score against this Sligo Rovers team who we think might manage to get a goal of their own in a winning performance.

We’re therefore expecting a very competitive encounter with a 0-1 winning score for Sligo Rovers at the conclusion of the game. 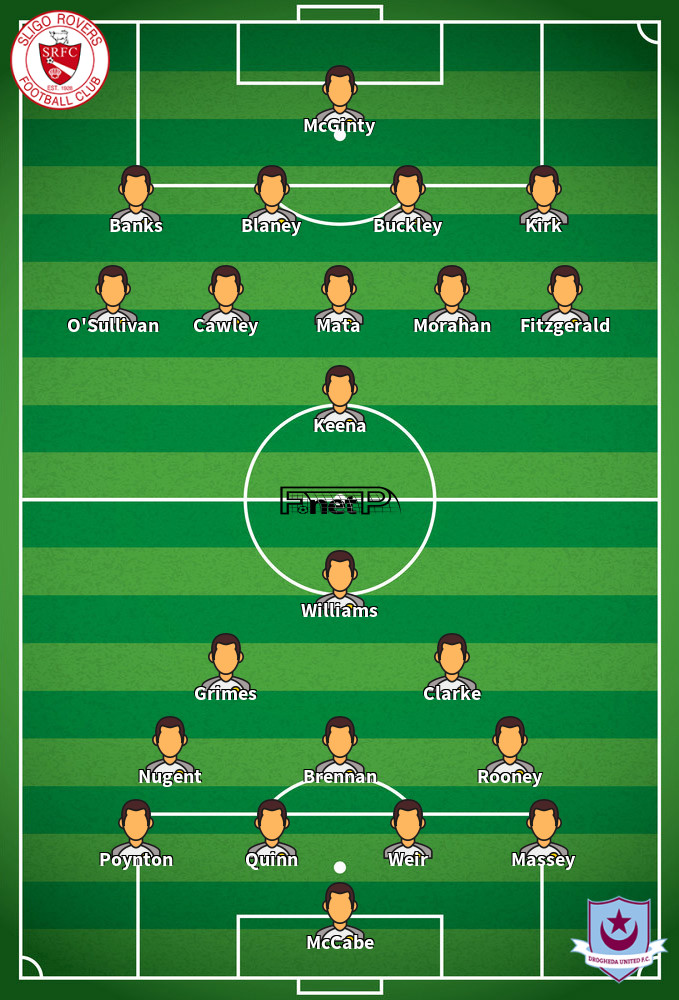 Mostly played in the Striker position, Dean Williams was born in Rep. Ireland. After making a first senior appearance for Shamrock Rovers in the 2020 season, the goalscoring Forward has scored a sum of 5 league goals in the Premier Division 2022 campaign to date in a total of 13 appearances.

While we have made these predictions for Drogheda United v Sligo Rovers for this match preview with the best of intentions, no profits are guaranteed. Always gamble responsibly, and with what you can afford to lose. Good luck with your selections.