Fortaleza will do battle with visiting side São Paulo at Estádio Governador Plácido Castelo in the Serie A clash on Sunday.

Our tips, poll and stats for Fortaleza v São Paulo can all be found here (including the best match odds).

Fortaleza head into this match after a 1-1 Copa Libertadores drawn match vs River Plate.

It has been seldom in recent times where Fortaleza haven’t conceded. It will be a concern for them that Fortaleza have failed to prevent opponents from scoring in 5 of their previous 6 games, letting in 7 goals during that time.

Heading into this fixture, Fortaleza haven't been beaten in the league by São Paulo in their last 2 matches.

The numbers tell their own story, and São Paulo have been scored against in 5 of their last 6 matches, conceding 8 goals in total. At the back, São Paulo seem to have a bit of a soft underbelly. Previous results aside, we’ll just have to find out if such a trend shall be maintained here in this game.

Looking at their past form shows that São Paulo:

A look at their most recent head to head meetings dating back to 25/10/2020 shows us that Fortaleza have won 2 of these games and São Paulo 1, with the number of drawn matches being 3.

In all, 20 goals were shared by the two clubs in this period, with 11 of them from Fortaleza and 9 belonging to Tricolor Paulista. The average number of goals per game works out to 3.33.

The last league contest featuring these sides was Serie A match day 31 on 11/11/2021 when it finished Fortaleza 1-1 São Paulo.

That time, Fortaleza managed 41% possession and 15 attempts on goal with 3 of them on target. The scorer was Robson (59').

For their opponents, São Paulo had 11 attempts at goal with 3 of them on target. Martín Benítez (92') scored.

The Fortaleza manager Juan Vojvoda will be grateful to have no fitness worries at all before this game thanks to a fully injury-free squad to choose from.

In all likelihood, Fortaleza look set to line up in a 3-5-2 system for this one, beginning the first half with Max Walef, Tinga, Marcelo Benevenuto, Brayan Ceballos, Yago Pikachu, Hércules, Felipe, Matheus Jussa, Juninho Capixaba, Moisés and Silvio Romero.

Thanks to a largely full-strength squad, there is only the lone fitness worry for the São Paulo gaffer Rogério Ceni to be concerned with. Walce (Cruciate Ligament Rupture) won’t be in action.

We’re inclined to think that São Paulo and Fortaleza may well both score, with little between these two teams.

Let’s see how this one goes, but it looks this could be a draw. We’re therefore expecting a score draw after 90 minutes. 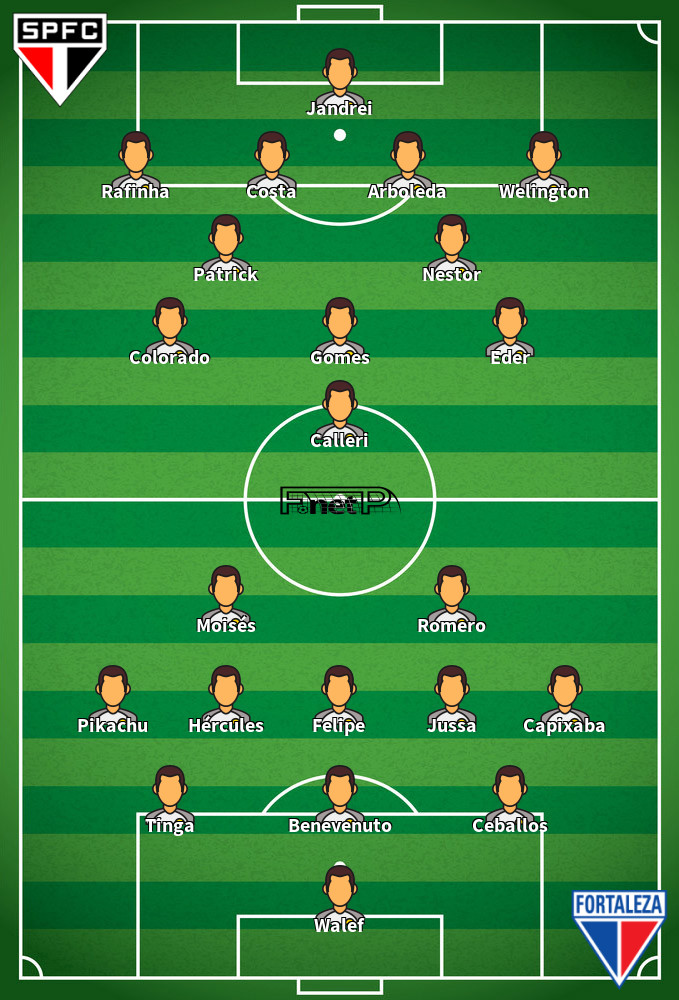 We have made these Fortaleza v São Paulo predictions for this match preview with the best intentions, but no profits are guaranteed. Please always gamble responsibly, only with money that you can afford to lose.