Liverpool will be visiting Craven Cottage on Saturday for the Premier League game with home team Fulham.

View all of the Fulham v Liverpool predictions, poll and stats below - as well as up-to-date odds.

Fulham will be hoping for a better result after a 4-0 Championship defeat in their last game at the hands of Sheffield United.

Fixtures with Fulham have proved to be engaging encounters recently with plenty of scoring expected. Over their past half dozen clashes alone, a total of 20 goals have flown in for both sides combined (at an average of 3.33 goals per game) with 12 of them belonging to Fulham.

Liverpool head into the match following a 3-1 FA Community Shield win versus Manchester City in their previous fixture.

Looking at their form, and Liverpool have been scored against in 5 of their last 6 matches, conceding 5 goals in total. In defence, Liverpool can certainly do much better. Even so, time will tell if such a trend might continue on here in this game.

A look at their most recent head-to-head clashes going back to 09/11/2013 shows us that Fulham have won 1 of them and Liverpool 4, with the number of drawn results being 1.

A sum of 17 goals were scored between them in this period, with 5 for The Cottagers and 12 belonging to The Reds. This gives an average number of goals per game equal to 2.83.

The last league contest between the two was Premier League match day 27 on 07/03/2021 which finished with the scoreline of Liverpool 0-1 Fulham.

In that match, Liverpool managed 63% possession and 16 attempts at goal with 3 on target.

It looks as if The Cottagers will possibly opt for a 4-2-3-1 system for this one with Marek Rodak, Kevin Mbabu, Tosin Adarabioyo, Tim Ream, Antonee Robinson, Harrison Reed, Joao Palhinha, Bobby Reid, Andreas Pereira, Neeskens Kebano and Aleksandar Mitrovic.

Liverpool manager Jürgen Klopp has to choose a team with limited availability. Alex Oxlade-Chamberlain (Hamstring Injury) and Caoimhin Kelleher (Unknown Injury) are names that won’t be on the team sheet.

We believe that Fulham are certainly able to find the net against this Liverpool side, however a single goal probably shouldn’t be enough.

We can see a narrow 1-2 win for Liverpool when the referee blows the final whistle. Should be an interesting one. 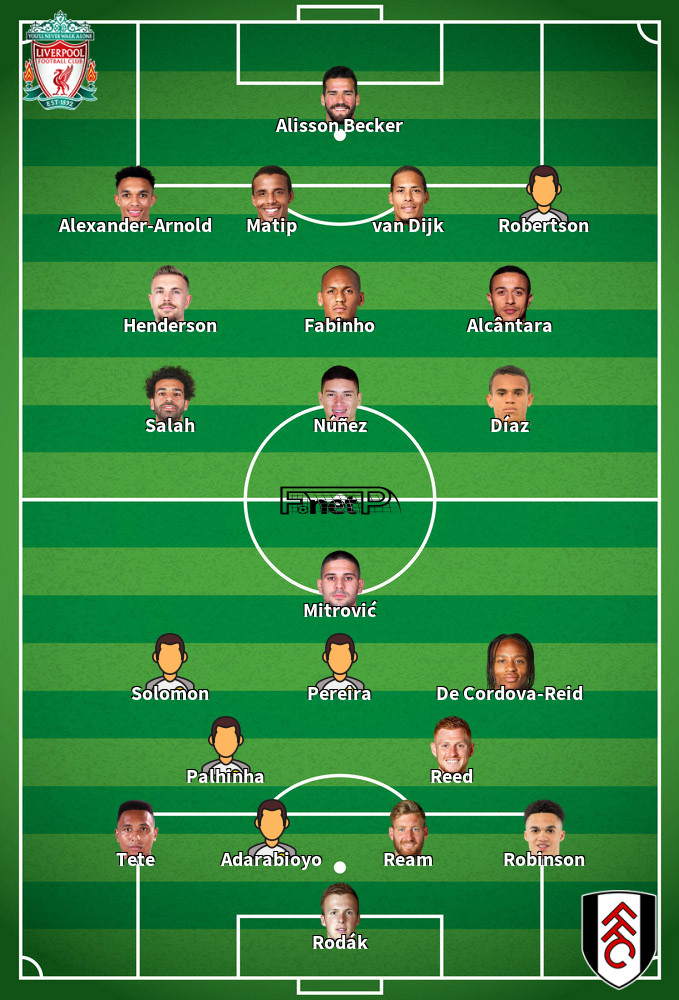 While we have made these predictions for Fulham v Liverpool for this match preview with the best of intentions, no profits are guaranteed. Always gamble responsibly, and with what you can afford to lose. Best of luck.