The Ligue 1 match at Stade Matmut Atlantique on Sunday sees home side Bordeaux up against Brest.

All Girondins de Bordeaux v Brest game predictions, stats and user poll are shown below - along with the latest match odds.

Bordeaux go into this game following on from a 3-3 Ligue 1 stalemate against FC Metz.

Brest will go into the game after a 4-0 Ligue 1 win with the eclipse of RC Lens in their last fixture.

In their previous six clashes, Brest have helped themselves to the sum of 11 goals. Brest have also not failed to score in every single one of those games. During that period, they have seen 5 goals go against them. That sort of pattern won’t necessarily be sustained into this game, though.

A review of their most recent head-to-head meetings dating back to 24/02/2013 tells us that Bordeaux have won 1 of them and Brest 3, with the number of drawn matches being 2.

An aggregate of 14 goals were scored between them during those clashes, with 5 of them from Les Girondins and 9 coming from Les Ty' Zefs. The average goals per game has been 2.33.

The last league clash between these sides was Ligue 1 match day 24 on 07/02/2021 and the score finished Brest 2-1 Girondins de Bordeaux.

Girondins de Bordeaux had 8 attempts at goal with 4 on target. Ui-Jo Hwang (56') scored.

The Bordeaux manager Vladimir Petković has no fitness concerns at all before this match owing to a completely healthy group available to choose from.

Thanks to a fully injury-free squad available to select from, the Brest manager Michel Der Zakarian does not have any fitness worries whatsoever ahead of this match.

When taking all factors into account, Brest and Girondins de Bordeaux may both find scoring difficult here.

At this stage, it appears to have the makings of a possible draw. That is why we are leaning toward a very close game with a 0-0 score when the referee blows the final whistle. 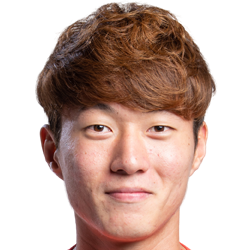 Generally deployed in the Striker position, Ui-Jo Hwang was born in Seongnam, Korea Republic. Having made a first senior appearance for Gamba Osaka in the 2017 season, the goalscoring Forward has scored 4 league goals in the Ligue 1 2021 - 2022 season so far coming from a total of 9 appearances.

We have made these Girondins de Bordeaux v Brest predictions for this match preview with the best intentions, but no profits are guaranteed. Please always gamble responsibly, only with money that you can afford to lose. Best of luck with your selections.