The Prva Liga fixture at Stadion Radnik on Sunday will see home side Gorica locking horns with Lokomotiva Zagreb.

Full predictions, pre-match stats and user poll for Gorica v Lokomotiva Zagreb are shown on this page - as well as up-to-date odds.

Gorica are hoping to win again after their last result, the 1-2 Prva Liga success over Slaven Belupo.

In that match, Gorica had 54% possession and 10 shots on goal with 5 of them on target. The only player to score for Gorica was Anthony Kalik (45', 62'). At the other end, Slaven Belupo got 13 attempts at goal with 6 on target. Marin Laušić (43') was the scorer for Slaven Belupo.

It has been seldom in recent games where Gorica have managed to hold out for a full 90 minutes. The reality is that Gorica have been scored against in 5 of their previous 6 clashes, giving up 9 goals on the way. That trend might not be continued into this game, though.

Looking at the pre-match facts, Gorica:

Lokomotiva Zagreb go into this match after a 1-0 Prva Liga win to beat Dinamo Zagreb in their most recent fixture.

Silvijo Čabraja's Lokomotiva Zagreb have had reason to celebrate scoring 9 times in the course of their latest 6 matches. The total of goals that have been scored against them during those same clashes comes to 7.

Delving into their past head to head meetings going back to 19/07/2020 shows that these fixtures have not been happy ones for Lokomotiva Zagreb. They’ve not managed to get themselves any wins at all whereas Gorica have been superior, finishing as winners in 67 per cent of those ties.

A combined sum of 17 goals were scored between them throughout the course of those matches, with 12 for Gorica and 5 created by Lokosi. That’s an average goals per game figure of 2.83.

The last league match between these sides was Prva Liga match day 7 on 28/08/2021 and the score finished Lokomotiva Zagreb 0-1 Gorica.

On that occasion, Lokomotiva Zagreb had 53% possession and 13 shots on goal with 3 of them on target.

Gorica had 6 shots on goal with 4 on target. Kristijan Lovrić (74') scored.

The referee was Duje Strukan.

The Gorica manager Krunoslav Rendulić does not have any fitness concerns to speak of coming into this match thanks to a fully injury-free squad available for selection.

Due to a fully injury-free group ready to go, the Lokomotiva Zagreb manager Silvijo Čabraja doesn’t have any fitness concerns to report coming into this clash.

In our view, Lokomotiva Zagreb are likely to find the back of the net against this Gorica team, but that is unlikely to be as many as the goals that they could concede.

Our selection here is for a 2-1 win for Gorica at full-time. It really should be an interesting one. 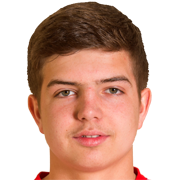 Regularly taking up the Central Defensive Midfielder position, Hrvoje Babec was born in Virovitica, Croatia. Having made his senior debut playing for Gorica in the 2021 - 2022 season, the talented Midfielder has got 2 league goals in this Prva Liga 2021 - 2022 campaign to date coming from a total of 15 appearances.

We have made these Gorica v Lokomotiva Zagreb predictions for this match preview with the best intentions, but no profits are guaranteed. Please always gamble responsibly, only with money that you can afford to lose.