Górnik Zabrze arrive at Suzuki Arena on Sunday for the Ekstraklasa game with hosts Korona Kielce.

Our full set of predictions, statistics and match poll for Korona Kielce v Górnik Zabrze can be seen below - plus the latest match odds.

Korona Kielce head into this game following on from a 2-2 Ekstraklasa drawn match against Miedź Legnica.

Leszek Ojrzyński's Korona Kielce have hit the back of the net a sum total of 7 times over their prior 6 outings. Conversely, the number of goals that have been scored against them in those same games stands at 7.

Going into this game, the form guide shows that Korona Kielce:

In the game prior to this, Górnik Zabrze drew 3-3 in the Ekstraklasa tie with Piast Gliwice.

In that match, Górnik Zabrze managed 75% possession and 23 attempts at goal with 7 of them on target. For Górnik Zabrze, the goals were scored by Richard Jensen (5' Own goal, 99'), Erik Janža (17') and Piotr Krawczyk (42'). Piast Gliwice had 6 shots on goal with 2 of them on target. Kamil Wilczek (14') and Damian Kądzior (49') scored for Piast Gliwice.

Looking at their form, and Górnik Zabrze have been scored against in 5 of their last 6 games, conceding 10 goals overall. In defence, Górnik Zabrze seem to have a bit of a soft underbelly.

Taking a look at their past results, Górnik Zabrze:

Checking on their prior head to head clashes dating back to 22/07/2018 shows us that Korona Kielce have won 1 of these & Górnik Zabrze 3, with the number of drawn matches being 2.

An aggregate of 19 goals were produced between them during those clashes, with 7 for Korona and 12 being from Trójkolorowi. That’s an average goals per game figure of 3.17.

The last league meeting featuring these sides was Ekstraklasa match day 1 on 19/06/2020 when the final score was Górnik Zabrze 3-2 Korona Kielce.

The Korona Kielce manager Leszek Ojrzyński has no fitness worries whatsoever coming into this game thanks to a completely healthy squad ready to go.

Thanks to a fully healthy squad available to select from, the Górnik Zabrze manager Bartosch Gaul does not have any fitness concerns at all coming into this clash.

Looking at these two teams, we feel that Korona Kielce could find themselves up against it to score goals against this Górnik Zabrze side who we think will be able to grind out a win.

We therefore see a 0-1 winning score for Górnik Zabrze at the end of the match. 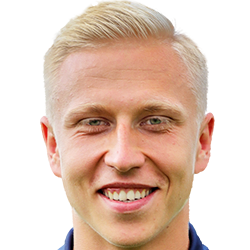 Typically played in the Right Wing position, Dawid Błanik was born in Jastrzębie Zdrój, Poland. After having made a senior debut playing for Pogon Szczecin in the 2017 - 2018 season, the gifted Forward has struck 2 league goals in the Ekstraklasa 2022 - 2023 season so far coming from a total of 4 appearances.

While we have made these predictions for Korona Kielce v Górnik Zabrze for this match preview with the best of intentions, no profits are guaranteed. Always gamble responsibly, and with what you can afford to lose. Best of luck with your selections.