Return to this page a few days before the scheduled game when this expired prediction will be updated with our full preview and tips for the next match between these teams.
Full-Time Result Prediction
👉
Houston Dynamo to Win

Houston Dynamo are hoping to win again after their last result, a 2-0 MLS triumph over Nashville.

In that game, Houston Dynamo managed 38% possession and 8 shots on goal with 4 of them on target. For Houston Dynamo, the goalscorers were Adalberto Carrasquilla (16') and Darwin Quintero (53'). At the other end, Nashville had 12 attempts at goal with 2 on target.

Paulo Nagamura's Houston Dynamo have scored a sum total of 7 times over their preceding half-dozen outings. The number of goals that have been scored against them in that time stands at 7.

Seattle Sounders FC head into the game after a 3-1 MLS win to defeat Minnesota United in their most recent outing.

An examination of their past head-to-head clashes going back to 09/10/2018 shows that Houston Dynamo have won 1 of these games & Seattle Sounders FC 5, with the number of drawn results being 0.

17 goals were scored between them in these games, with 5 of them from Orange Crush and 12 created by The Sounders. That is an average goals per game value of 2.83.

The last league fixture featuring the two was MLS match day 39 on 17/10/2021 which finished with the scoreline of Houston Dynamo 2-1 Seattle Sounders FC.

On that occasion, Houston Dynamo had 42% possession and 13 shots on goal with 3 on target. Goals were scored by Maxi Urruti (14') and Darwin Quintero (20').

At the other end, Seattle Sounders FC got 11 shots at goal with 3 on target. Jimmy Medranda (41') was the scorer.

The Houston Dynamo manager Paulo Nagamura will be thankful to have no fitness worries to speak of coming into this game owing to a completely healthy group available to choose from.

Thanks to a mainly healthy group of players, there is only the sole fitness issue for the Seattle Sounders FC gaffer Brian Schmetzer to be concerned about. João Paulo (Cruciate Ligament Rupture) won’t be playing here.

We’re thinking that Seattle Sounders FC will have to play well to get anything against this Houston Dynamo side who we think will likely score at least once to put them ahead.

Our tip is therefore for a 1-0 win for Houston Dynamo after 90 minutes. 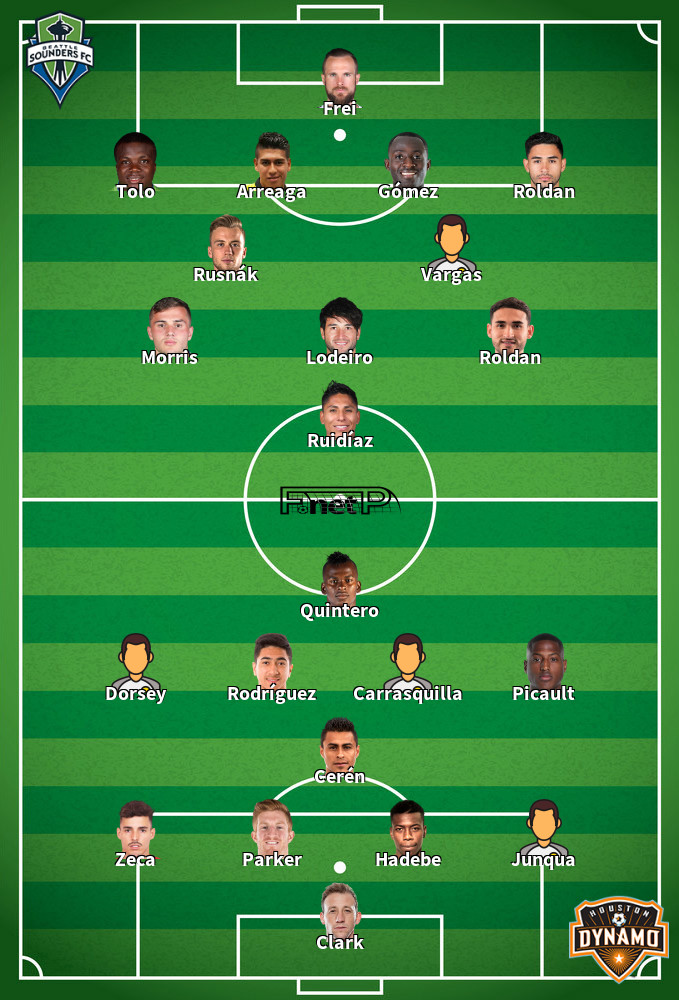 We have made these Houston Dynamo v Seattle Sounders FC predictions for this match preview with the best intentions, but no profits are guaranteed. Please always gamble responsibly, only with money that you can afford to lose. Best of luck.