IF Brommapojkarna vs Östers IF Live Stream, Predictions

IF Brommapojkarna vs Östers IF Live Stream

This IF Brommapojkarna v Östers IF live stream video is ready to be broadcast on 27/06/2022. Football fans can watch this game on a live streaming service should the game be included in the schedule referenced above. Here we give useful information for watching this Superettan game that includes the most recent guide to form, h2h meetings and our match views.

To view the match via other methods, check TV channel schedules for your local region. These broadcasting rights are usually distributed on a per-competition/league or even individual game basis. For fixtures shown live on regional tv programmes, check the listings on stations like BT Sport, Amazon Prime Video, Sky Sports, Now TV, iTV, Canal+, Fox Soccer, ESPN relevant to your location.

Where the abovementioned broadcaster does broadcast a IF Brommapojkarna v Östers IF soccer live streaming service, you’ll be able to see it on your mobile (iPhone, Android including Huawei) and computer or even tablet (eg iPad, Lenovo Tab).

Post-game, we might also provide a link to the match highlights from time to time. We are not responsible for the transmission of any match video content linked to from this site. All legal issues must be dealt with via the hosters/owners of the content.

The Superettan fixture at Grimsta IP on Monday sees hosts IF Brommapojkarna playing against opponents Östers IF.

View all of the IF Brommapojkarna v Östers IF predictions, poll and stats below - plus the latest match odds.

IF Brommapojkarna will want to continue from where they left off last time out with a 0-2 Superettan triumph vs Örebro SK.

A look at their previous results shows us that IF Brommapojkarna:

Östers IF go into this match following on from a 2-0 Superettan win over Jönköpings Södra IF in their last game.

For Östers IF, the goals were scored by Jesper Westermark (7') and Isak Magnusson (90').

In their previous 6 clashes, Östers IF have helped themselves to a total of 11 goals. Östers IF have additionally got on the scoresheet in every single one of those games. Over that period, they’ve seen 7 goals go into their own net. We will just have to see if that trend will be continued on here.

There have been a high number of draws between the two sides. In their head to head meetings beginning from 01/04/2013, fans have seen 5 of them. That’s a comparatively high 83 per cent of games being drawn.

A combined total of 15 goals were shared by the two clubs in this period, with 9 from BP and 6 for Östers. That’s an average goals per game figure of 2.5.

The last league fixture between these sides was Superettan match day 20 on 18/08/2019 which finished with the scoreline of IF Brommapojkarna 1-1 Östers IF.

The referee was Joakim Östling.

The IF Brommapojkarna boss Christer Mattiasson doesn’t have any fitness worries whatsoever ahead of this game owing to a completely injury-free squad to pick from.

Owing to a fully healthy squad available to choose from, the Östers IF manager Srdjan Tufegdžić has no fitness concerns to speak of before this game.

We envisage that Östers IF will surely be able to get a goal against this IF Brommapojkarna lineup, however it possibly won’t be as many as the goals that they could concede.

We’re tipping a tight encounter finishing with a 2-1 victory for IF Brommapojkarna when all is said and done. We’ll have to see what happens. 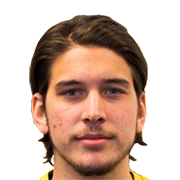 Regularly played in the Striker position, Nikola Vasić was born in Sweden. After having played his first senior match for Reggina in the 2020 - 2021 season, the dangerous Forward has got 4 league goals in the Superettan 2022 season so far in a total of 9 appearances.

While we have made these predictions for IF Brommapojkarna v Östers IF for this match preview with the best of intentions, no profits are guaranteed. Always gamble responsibly, and with what you can afford to lose. We wish you the best of luck.

⚽️ Where can I find the previews for other Superettan games?

You can see all of our upcoming (and previous) Superettan predictions & previews here.