The Serie A fixture at Stadio Olimpico di Roma on Saturday will see home side Lazio ready themselves for the visit of Inter Milan.

View all of the Lazio v Inter Milan predictions, poll and stats below - along with the latest match odds.

Lazio will be looking for an improved result here after the 3-0 Serie A loss in their previous game against Bologna.

It has been a rare occasion in recent times where Lazio have shown defensive steel. The facts show that Lazio have been scored against in 5 of their previous 6 clashes, leaking 9 goals on the way.

Going into this game, the form guide shows that Lazio:

Inter Milan come into this clash following a 1-2 Serie A win vs Sassuolo in their previous outing.

In that match, Inter Milan had 44% possession and 18 attempts on goal with 3 of them on target. For Inter Milan, the goals were scored by Edin Džeko (58') and Lautaro Martínez (78'). On the other side, Sassuolo had 12 shots at goal with 8 on target. Domenico Berardi (22') was the scorer for Sassuolo.

Leading up to this clash, Inter Milan:

Checking out their prior head to head meetings stretching back to 31/01/2019, both clubs have shared the honours with Lazio winning 2 of those games, Inter Milan 2 and 2 being drawn in normal time.

A total of 13 goals were shared by the two clubs during those clashes, with 6 from i Biancocelesti and 7 for Nerazzurri. The average number of goals per game works out to 2.17.

Lazio had 15 shots at goal with 6 on target. Sergej Milinković-Savić (61') was the scorer.

It doesn’t get much better regarding selection, with just one fitness concern for the Lazio gaffer Maurizio Sarri to be concerned with from an otherwise complete group. Bobby Adekanye (Meniscal Injury) will miss out. Francesco Acerbi is ineligible for this match because of suspension.

We feel that over the course of the game, Lazio will need to apply a lot of pressure to see themselves scoring against this Inter Milan side who will likely emerge victorious.

Our tip is therefore for a very even match with a 0-1 winning margin for Inter Milan when the full-time whistle blows. 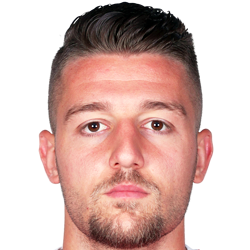 Regularly played in the Centre Midfield position, Sergej Milinković-Savić was born in Lleida, Spain. After having played his first senior match for KRC Genk in the 2014 - 2015 season, the accomplished Midfielder has scored a sum of 2 league goals in the Serie A 2021 - 2022 campaign to date in 7 appearances.

We have made these Lazio v Inter Milan predictions for this match preview with the best intentions, but no profits are guaranteed. Please always gamble responsibly, only with money that you can afford to lose. We wish you the best of luck.