OFI Crete are the guests at Municipal Stadium Lamia on Saturday for the Super League tie with home side Lamia.

View all Lamia v OFI Crete tips, stats and our pre-match poll below - plus the latest match odds.

Lamia will play in this match following a 0-0 Super League draw versus Atromitos.

Their most recent results really do illustrate the point that it has been a great time for the Lamia defence. Kyanólefki have given the opposition little, resulting in the total number of goals that have gone past their goalkeeper during their last six outings standing at 2. It will be interesting to find out whether or not that trend can be sustained in this game.

Analysis of their past results shows that Lamia:

OFI Crete will go into this meeting after a 0-1 Super League win against Larissa in their last match.

The strike force from OFI Crete have been starved of goals over their last 6 games, recording the unsatisfactory return of just 4. In those matches, Omilos have also seen the collective goal aggregate against them equal 3.

Coming into this meeting, OFI Crete are undefeated in their previous 3 league matches away from home.

Looking over their past head-to-head meetings dating back to 07/10/2018 shows that Lamia have won 2 of these & OFI Crete 3, with the tally of drawn games standing at 1.

A sum of 17 goals were yielded between them throughout the course of those matches, with 7 from Kyanólefki and 10 netted by Omilos. This gives an average number of goals per game equal to 2.83.

The previous league meeting featuring the two was Super League match day 15 on 07/01/2021 when it ended OFI Crete 2-0 Lamia.

In that game, OFI Crete had 53% possession and 9 attempts at goal with 4 of them on target. Goals were scored by Paschalis Staikos (34') and Nikos Vafeas (85').

Lamia got 6 shots at goal with 4 of them on target.

The match was refereed by Praxiteles Zachariadis.

We’ve got the feeling that Lamia must be fancied to get a goal against this OFI Crete team, however a single goal likely won’t be enough to avoid a loss.

We’re therefore tipping a tight encounter finishing with a 1-2 winning score for OFI Crete at the end of the 90 minutes. 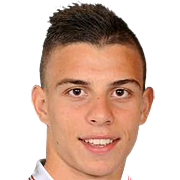 Regularly played in the Striker position, Lazar Romanić was born in Kragujevac, Serbia. Having played his first senior match for Lamia in the 2018 - 2019 season, the gifted Forward has scored 3 league goals in the Super League 2020 - 2021 season so far in a total of 26 appearances.

We have made these Lamia v OFI Crete predictions for this match preview with the best intentions, but no profits are guaranteed. Please always gamble responsibly, only with money that you can afford to lose. Best of luck with your selections.