Linfield are the guests at Shamrock Park on Saturday for the Premiership showdown with home side Portadown.

Our Portadown v Linfield predictions, statistics and match poll can be seen below - plus the latest match odds.

Portadown won’t want a repeat of their last result here following a 2-0 Premiership loss in their previous game against Larne.

In their past 6 games, Niall Currie's Portadown have netted a total of 5 times, with that being an average number of goals scored per match equal to 0.83.

Ahead of this clash, Portadown have left without a victory over Linfield in their previous 11 matches in the league.

After tasting defeat last time out to Crusaders in Premiership action, Linfield will be hoping to turn things around here.

A succession of steadfast displays from the Linfield defenders has resulted in the number of goals they’ve conceded amounting to 4 from their last 6 clashes overall. During the same period of time, the number of goals that they have scored themselves amounts to 12. That kind of trend might not follow through into this game, of course.

Going into this encounter, Linfield haven't been defeated by Portadown in games played away from home for the previous 6 league games. Away fans have certainly had plenty to cheer about.

Looking at past results between these clubs going back to 27/03/2021 shows that these encounters have not been good ones for Portadown. They have not managed to get themselves any victories whatsoever while Linfield have been the better of the two, beating them in 83% of those ties.

An aggregate of 14 goals were produced between them during those clashes, with 2 of them for The Ports and 12 netted by The Blues. That is an average goals per game value of 2.33.

The last league clash between the two was Premiership match day 14 on 05/11/2022 which ended up with the score at Portadown 0-3 Linfield.

The match was refereed by Shane Andrews.

The Portadown manager Niall Currie does not have any fitness worries to speak of before this match thanks to a completely healthy group available to choose from.

Thanks to a mainly healthy group, there’s only the lone fitness problem for the Linfield boss David Healy to be concerned about. David Walsh (Head Injury) won’t be playing here.

In this match, Portadown must be fancied to put a goal past this Linfield lineup, although one goal isn’t likely to be as many as they will have scored against them.

We’re going for a close game with a 1-2 win for Linfield at full-time. Should be a good one. 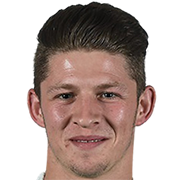 Customarily used in the Striker position, Gregory Moorhouse was born in Rep. Ireland. Having made a first senior appearance for Glenavon in the 2016 - 2017 season, the gifted Forward has hit 3 league goals in the Premiership 2022 - 2023 season to date in 9 appearances.

While we have made these predictions for Portadown v Linfield for this match preview with the best of intentions, no profits are guaranteed. Always gamble responsibly, and with what you can afford to lose. Best of luck with your selections.