This Montedio Yamagata v Zweigen Kanazawa live stream video is scheduled for 23/11/2020 . Fans of both clubs can watch this fixture on a live streaming service should the game be featured in the schedule mentioned above. Here we provide you with useful information for watching this J2 League match including the most recent guide to form, head to head clashes and our match views.

To view the game using other methods, search for TV channel listings relating to your locality. Such broadcasting deals are typically allocted on a per-competition/league or even indivdual game basis. For matches shown live on regional television programmes, check the schedules on channels such as BT Sport, Amazon Prime Video, Sky Sports, Now TV, iTV, Canal+, Fox Soccer, ESPN depending on your current location.

When the abovementioned broadcaster indicates that they have the Montedio Yamagata v Zweigen Kanazawa football live streaming service, you’ll be able to view the game on mobile devices (iPhone, Android including OnePlus) and PC as well as tablet (eg iPad, Huwawei MatePad).

After the match finishes, we may also link to highlights from time to time. We are not responsible for the transmission of any game video content linked to from this site. All legal issues must be directed to the hosters/owners of the content.

Zweigen Kanazawa head to NDsoft Stadium Yamagata on Wednesday for the J2 League showdown with home side Montedio Yamagata.

Full predictions, pre-match stats and user poll for Montedio Yamagata v Zweigen Kanazawa are shown on this page - along with the latest match odds.

The only name on the scoresheet from Montedio Yamagata was Vinícius (12'). Koki Kido (68') was the scorer for Avispa Fukuoka.

It has been a rare occasion in recent games that Montedio Yamagata have managed to hold out for a full 90 minutes. The reality is that Yamagata have failed to prevent opponents from scoring in 6 of their previous 6 matches, leaking 9 goals on the way.

Ahead of this clash, Montedio Yamagata have not registered a win against Zweigen Kanazawa in their last 4 matches in the league.

Following on from suffering a loss in their previous game against Albirex Niigata in J2 League action, Zweigen Kanazawa and their travelling fans will hope for a better result here.

Looking at their form, and Zweigen Kanazawa have been scored against in 5 of their last 6 games, with opponents netting 13 goals overall. In defence, Zweigen have been far from perfect. That kind of pattern might not be continued into this game, of course.

Coming into this clash, Zweigen Kanazawa have not won away from home in their last 4 league games.

Checking out their prior head to head duels going back to 11/08/2017, neither club has come out on top overall with Montedio Yamagata winning 2 of those games, Zweigen Kanazawa 2 and 2 being drawn in normal time.

10 goals were scored between the two sides in this period, with 5 of them from Yamagata and 5 being from Zweigen. The average number of goals per game works out to 1.67.

The last league encounter between the two was J2 League match day 13 on 19/08/2020 when the final score was Zweigen Kanazawa 1-1 Montedio Yamagata.

From a largely healthy group, there’s only a single fitness issue for the Zweigen Kanazawa boss Masaaki Yanagishita to be concerned with. Ryuhei Oishi (Cruciate Ligament Surgery) misses out for this game.

Looking at these two teams, we feel that Montedio Yamagata will more than likely get amongst the goals when they face Zweigen Kanazawa, who may well struggle scoring. 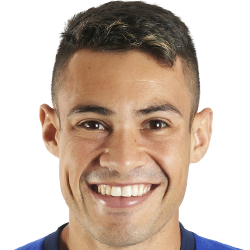 Generally taking to the field in the Striker position, Vinícius was born in Minas Gerais, Brazil. Having made his senior debut playing for Cruzeiro in the 2013 season, the accomplished Forward has contributed 10 league goals in the J2 League 2020 campaign so far coming from a total of 29 appearances.

We have made these Montedio Yamagata v Zweigen Kanazawa predictions for this match preview with the best intentions, but no profits are guaranteed. Please always gamble responsibly, only with money that you can afford to lose. Best of luck.

⚽️ Where can I find the odds for other J2 League games?

View all of the upcoming (and previous) J2 League predictions & previews here.