Union Saint-Gilloise head to Diaz Arena on Sunday for the First Division A tie with home side Oostende.

All Oostende v Union Saint-Gilloise game predictions, stats and user poll are shown below including the latest game odds.

Oostende will be wanting a better result here after the 1-0 First Division A defeat last time out to Oud-Heverlee Leuven.

It’s been all too rare in recent times that Oostende have kept a clean sheet. The reality is that Oostende have failed to prevent opponents from scoring in 6 of their previous 6 clashes, leaking 9 goals on the way. Nevertheless, time will tell if that trend might continue on in this match or not.

Union Saint-Gilloise will go into this match after a 4-0 First Division A win vs Charleroi in their most recent fixture.

Going into this contest, Union Saint-Gilloise have not been beaten in their last 4 league matches away from home.

The Oostende manager Alexander Blessin will be thankful to have no fitness worries at all before this match with a fully injury-free group to pick from.

With a completely healthy group to choose from, the Union Saint-Gilloise manager Felice Mazzu has no fitness worries whatsoever coming into this clash.

In this game, Oostende are dangerous enough to breach the defence of this Union Saint-Gilloise team, although just one goal possibly won’t prevent defeat.

Our tip is for a 1-2 winning margin for Union Saint-Gilloise after 90 minutes. Looking forward to seeing how this one unfolds. 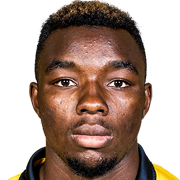 Mostly played in the Striker position, Thierry Ambrose was born in Sens, France. Having made his senior debut playing for NAC Breda in the 2017 - 2018 season, the dangerous Forward has hit 2 league goals in this First Division A 2021 - 2022 season so far in 13 appearances.

While we have made these predictions for Oostende v Union Saint-Gilloise for this match preview with the best of intentions, no profits are guaranteed. Always gamble responsibly, and with what you can afford to lose. We wish you the best of luck.