Return to this page a few days before the scheduled game when this expired prediction will be updated with our full preview and tips for the next match between these teams.
The Super League game at Nea Smyrni Stadium on Saturday sees home side Panionios take to the field against Skoda Xanthi. Scroll down to see all of the predictions, poll and statistics for Panionios v Skoda Xanthi - plus the latest match odds.

Panionios will want to continue from where they left off last time out with the 0-1 Super League victory against Lamia. The only player to score from Panionios was Sotiris Tsiloulis (27').

An interesting characteristic of more recent Panionios games is the number of results with a nil in them. From their prior sextet of matches before this one, in 5 of them a bet on BTTS would've been a loser. We will have to find out whether or not that trend will end up being continued on in this game.

Taking a look at their past results, Panionios:

For 6 of the previous six clashes featuring Skoda Xanthi, a relatively low number of goals have been hit between them and their opponents. The overall average goals scored per game within that spell works out to just 1.17, with the number of goals averaged by Vasilissa Tis Thrakis equalling 0.5. We will have to find out whether or not that trend will end up being continued on here.

Their past results show that Skoda Xanthi:

An examination of their past head to head clashes going back to 19/11/2017 tells us that Panionios have won 3 of these and Skoda Xanthi 1, with the tally of drawn results being 2.

A combined total of 7 goals were yielded between them in these games, with 4 for Kyanerythri and 3 coming from Vasilissa Tis Thrakis. That’s an average goals per game of 1.17.

The previous league meeting between these sides was Super League match day 23 on 08/02/2020 when it ended Panionios 0-0 Skoda Xanthi. On that occasion, Panionios had 48% possession and 7 attempts at goal with 3 of them on target. For their opponents, Skoda Xanthi got 8 shots at goal with 4 on target. The referee was Aristotelis Diamantopoulos.

Panionios boss Leonidas Vokolos has no fitness worries whatsoever before this game thanks to a completely healthy group to choose from.

Owing to a completely healthy group available for selection, Skoda Xanthi boss Nikos Karageorgiou does not have any fitness concerns at all before this game.

We believe that Skoda Xanthi have it in them to get a goal against this Panionios lineup, but that isn’t expected to be as many as they’ll concede. We think that it’s going to be a tight encounter finishing with a 2-1 victory for Panionios by the conclusion of the game. We are expecting it to be pretty even.

Both Teams to Score Prediction for Panionios vs Skoda Xanthi
Yes 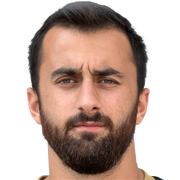 Regularly used in the Striker position, Bachana Arabuli was born in Tbilisi, Georgia. Having made a first senior appearance for Balmazújváros in the 2017 - 2018 season, the gifted Forward has contributed 6 league goals in the Super League 2019 - 2020 season so far from a total of 26 appearances.

We have made these Panionios v Skoda Xanthi predictions for this match preview with the best intentions, but no profits are guaranteed. Please always gamble responsibly, only with money that you can afford to lose. Best of luck with your selections.